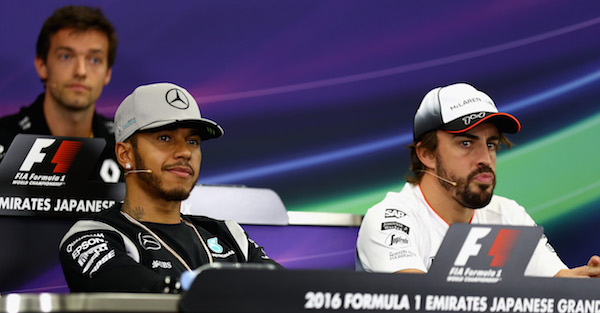 Clive Mason/Getty Images
SUZUKA, JAPAN - OCTOBER 06: Lewis Hamilton of Great Britain and Mercedes GP in the Drivers Press Conference with Fernando Alonso of Spain and McLaren Honda and Jolyon Palmer of Great Britain and Renault Sport F1 during previews ahead of the Formula One Grand Prix of Japan at Suzuka Circuit on October 6, 2016 in Suzuka. (Photo by Clive Mason/Getty Images)

Lewis Hamilton ran away with the Formula 1 championship this year, and the four-time champion had the title clinched with several races remaining.

While Hamilton was dominating, his former teammate, Fernando Alonso, was struggling as he finished 15th for the year. Alonso’s team at McLaren ran into issues all season, and they are changing from Honda to Renault for next season.

Hamilton said he hopes the change will help Alonso be more competitive next season because he would like to see them contend.

“I had a great battle with Fernando earlier this year, towards the end of this season,” Hamilton said via Motorsport. “I’d love to have more battles with him on a much more level playing ground.

“There’s just a natural place in my heart for them, because I achieved a huge amount with them.”

Hamilton and Alonso didn’t exactly have the best relationship when they were teammates at McLaren, but it has improved in recent years. He said he hopes the new power unit from Renault will help propel the team into contention again.

Alonso hasn’t won a race since 2013, and the 2017 season was especially difficult for him. As Hamilton suggested, hopefully the change from Honda to Renault will help him next year.