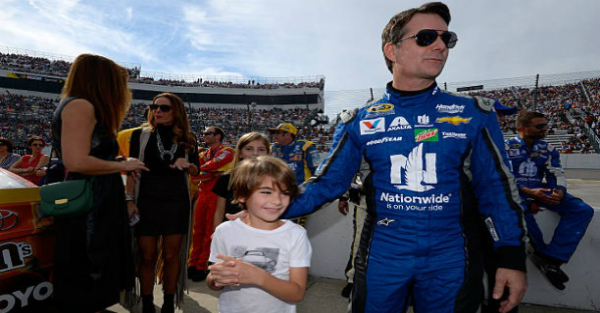 Waking up to news that a Gordon was on a race track nearly made our heart skip a beat.

It’s been more than two years since Jeff Gordon retired from NASCAR, and one since he drove part-time as a sub for Dale Earnhardt Jr. So naturally when we heard the name Gordon and race track, it was only natural to assume …

RELATED: Jeff Gordon addresses coming back to race at Daytona

Even though it wasn’t Jeff on the track, it was great to see a video of his six-year-old son Leo driving a quarter midget.

Jeff asked Leo if he was ready to give it another go, and how many laps he would do. Leo raised his hand, with all of his fingers extended to indicate he would be doing five laps.

After Leo stopped, Jeff ran over to the car as Leo blurted out, “I did more than five.”

Jeff was definitely a proud papa, as he told his son he did an amazing job.

Who knows? In another decade or so, we could be cheering for Leo on Sundays.