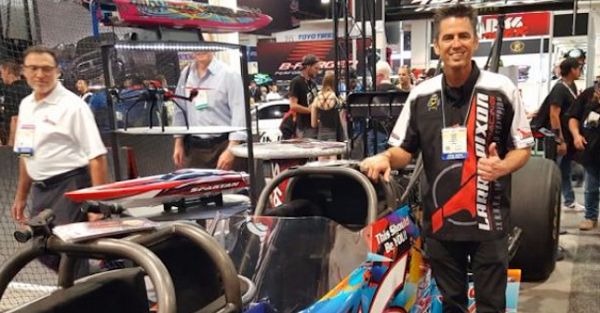 Each fall, the SEMA Show is held at the Las Vegas Convention Center and is branded as “the premier automotive specialty products trade event in the world.”

The best and brightest minds in the aftermarket car business gather in the desert to show off their latest designs, demonstrate new products, and network with like-minded car junkies.

Unfortunately though, the custom vehicle that three-time NHRA Top Fuel champion Larry Dixon brought to Las Vegas earned him an indefinite suspension from the National Hot Rod Association, according to Motorsport.com.

That’s because the two-seater NitroX2 Dragster that was displayed on the first day of the SEMA Show featured an NHRA chassis tag on the 10,000-horsepower dragster, which had not been approved by the drag racing governing body.

Below is the official statement from the NHRA:

“The NHRA imposed an indefinite suspension of competition privileges against Larry Dixon for violating NHRA Rules, particularly Section 1.3.1 Participant Conduct and 1.6.3 Chassis Inspection of the 2017 NHRA Rulebook. NHRA Tech Department discovered the use of an NHRA chassis tag on an unauthorized and unapproved two-seat dragster. Any further incidents could result in further action.“

This suspension means the 51-year-old Dixon can’t compete in either the Mellow Yellow professional or Lucas Oil sportsman series.

Dixon had intended to use the two-seat dragster as the showpiece for the Larry Dixon Top Fuel Experience. Having the additional seat would allow paying customers to take a ride down a 1/8-mile drag strip.

The 62-time NHRA drag racing winner has since apologized to the NHRA and admitted it was a mistake not to remove the NHRA chassis tag.

“I know the sticker was on there, but I didn’t know it was breaking any rule to have it on there and if I did it would have been off in a heartbeat,” Dixon told CompetitionPlus.com. “It was a two-year-old expired sticker, and so I didn’t really think anything more than that other than it was an expired sticker.