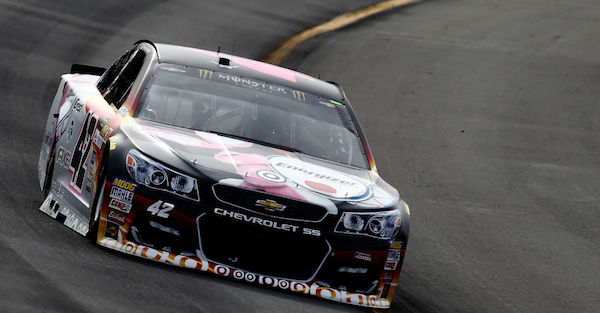 Kyle Larson has had one of the best seasons of any driver in 2017, but he didn’t fare well during Sunday’s Overton’s 400 at Pocono Raceway.

Larson’s had to make a trip to the garage after something flew off from his No. 42 car.

All parts are supposed to stay on the car. @KyleLarsonRacin is headed to the garage. #NASCARonNBCSN pic.twitter.com/8E1eo5hrHX

Footage from inside the car shows how Larson had trouble braking.

🔊Listen to this 🔊@KyleLarsonRacin has problems entering Turn 1 at @PoconoRaceway. @CGRTeams is trying to fix it. #NASCARonNBCSN pic.twitter.com/qJ4AqJ5V8Z

Larson was able to continue racing, but he finished 33rd and was last of all the drivers that finished the race. He told NBC after the race that he was disappointed because he felt like he had a top five car.

“I had a drive shaft break,” Larson said. “I don?t know if it was my doing or what, but I didn?t change my motion up or anything like that. I thought it was fairly normal from what I did and everything just shattered when I got into third gear. Yeah, a little disappointing because our Energizer Chevy was pretty good today.  I thought we had a top five car for sure.”

Larson is still second in the points behind Martin Truex Jr., and he has a chance to get back on track next Sunday at Watkins Glen International.