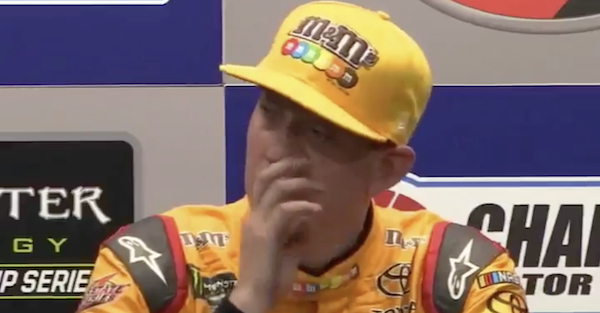 Kyle Busch needs to sit down and humble himself a bit. The Number 18 driver has gathered a bit of negative press after his loss at the Coca-Cola 600 last Sunday.

In case you missed it, Busch gave an interview after his loss that could be best described as childish. When asked by a reporter if he was surprised about Austin Dillon’s win, Busch took a brief break from picking his nose, seriously, he was picking his nose on TV, to say, “I’m not surprised by anything. Congratulations.” Mic drop.

Kyle Busch is not surprised by anything.#MicDrop #NASCAR #CocaCola600 pic.twitter.com/pq932ISkMX

Fear not, Busch fans. Kyle has an excuse for his brilliant display of poor sportsmanship. You see, according to Busch, champions are just held to a higher standard. Kyle Busch is a champion, so when he catches flak for being a brat, he’s not acting like a brat, he’s being held to a super high bar because he is a champion.

“Bill Belichick gets it differently than anybody else. But, you know, we also sometimes are more successful than others as well, too.”

It’s probably getting pretty hard to read right now with all those eye rolls.

Grow up, Busch. The way he’s headed, it seems like Busch is only a few PR disasters from dropping another “covfefe” on us.

Related: Brad Keselowski and Toyota exec get into it over Kyle Busch’s press conference tantrum