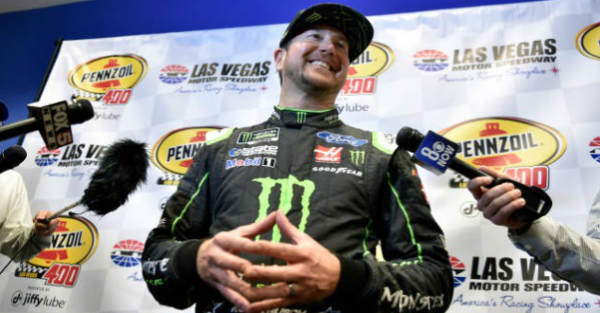 With the 2018 NASCAR Monster Energy Cup Series season just two weeks away,  Kurt Busch is glad to have the first hurdle of the season out of the way and is ready to put 2017 behind him.

Busch will be entering the new season with a new team around him. His former crew chief Tony Gibson moved into an advisory role with Stewart-Haas Racing and will oversee all of its teams. So the upcoming season will be a bit of trial and error and learning on the fly in some aspects.

Busch was one of 16 drivers who participated in organizational testing at Las Vegas Motor Speedway earlier in the week, and he got to do so on his hometown track. He referred to the testing as the “first day at school” for the upcoming season, according to NBC Sports.

RELATED: Kurt Bush loves racing, but has his eyes on another career

And while they’re getting ready for 2018 Busch is happy to have part of 2017 in the rear view mirror after the uncertainty that came with “free agency” and re-signing with Stewart-Haas Racing.

“It felt good to get the contract signed,” Busch said. “We had to go through some of the waiting period in what you would call free agency, but it wasn?t all that equivalent to such.”

“It?s more about all the balls in the air with sponsorship, manufacturer, my agenda, the team?s agenda,” added Busch. “It?s great to have that behind us.”

Busch won the season opener at Dayton last year and is looking to become the first driver in over 20 years to win the race in back-to-back seasons since Sterling Marlin in 1994 and 1995.

“Definitely feeling the pressure for Daytona,” Busch said. “Family and friends have been asking me, ‘You won Daytona, do you feel less pressure?’ I feel more.”

“I want to go back there and repeat and it hasn?t been done since the (mid) 90s with Sterling Marlin,” Busch added.