If you missed Texas, you can see all the highlights here, and it’ll take 2 minutes 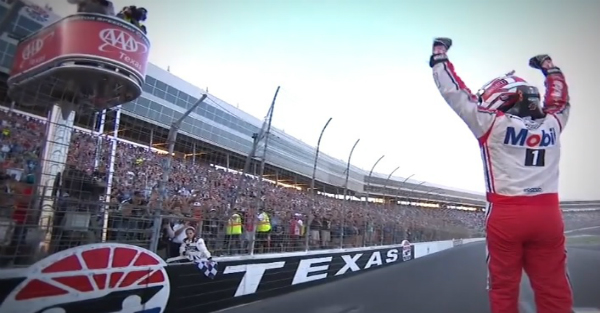 If for some reason you missed the Texas AAA 500, have no fear. This recap covers it from start to finish in the matter of two minutes.

The race began with Kurt Busch and Denny Hamlin in row one. It didn’t take long for the action to begin as Kyle Busch and Brad Keselowski made contact with each other on the first lap. But the two were able to continue the race. In the 283rd lap Larson spun out into the wall garnering him his third consecutive DNF and a 37th place finish

Kevin Harvick won the first stage of the race, with Kyle Larson taking the second stage, and Harvick stepped back to the forefront to capture the win and secure a spot at Homestead. Martin Truex Jr. also secured his spot joining Kyle Busch as three of the four drivers that will race for the Monster Energy Cup Series Championship at Homestead in two weeks.

RELATED: Two spots at Homestead get locked up in a dramatic finish at Texas

Before the season wraps up in Homestead, there’s a pit-stop in Phoenix this week, that will determine the final driver that will be gunning for a shot at a title. Of the five remaining drivers, it’s anyone’s race. A first place finish would most likely secure any of them the coveted fourth remaining spot.