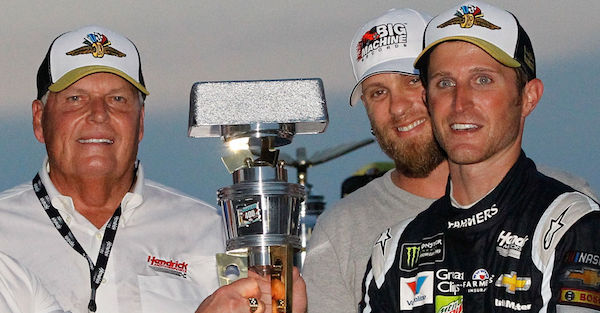 Kasey Kahne is looking for a ride, and  just today, he said that he wouldn’t drive the XFinity Series. For him, it’s the Cup Series or bust.

An Alt-Driver (unscientific) poll of its readers shows that nearly 59% of the audience believes Kahne will find a ride in the Cup Series in 2018, and get his wish.

I happen to care very much about this fantastic driver, person, role model and wish him all the best!!! Kasey deserves far better than he has been given!! Linda Pryor Burch said on our Facebook page.

Another 23% think that he’ll be a substitute driver in the Cup series next season, and another 14% believe he’ll have to sit out a season in order to get what he wants.

Casey Keller, on our Facebook page, said: The car owners..i think are starting to feel the pinch now..look at the stands..no one is going to the races anymore.the sport has been changed so much by nascar that nobody wants to go to the races and the car owners can’t afford their veteran drivers anymore.so they hiring younger drivers and paying them less money.

Kahne, the Brickyard winner, in remarks reported by SavannahNow, says he’s not interested in driving in the XFinity series next season.

Kahne is one of several successful, veteran drivers looking for a ride in 2018 as NASCAR teams confront a sponsorship crunch.

But will he be able to find a ride?

Kahne was only the latest big name driver to sever ties with his team. Stewart Haas Racing has announced it won’t renew Kurt Busch’s deal, and might cut ties with Danica Patrick. Matt Kenseth, a former Cup Champion, won’t be retained by Joe Gibbs Racing.