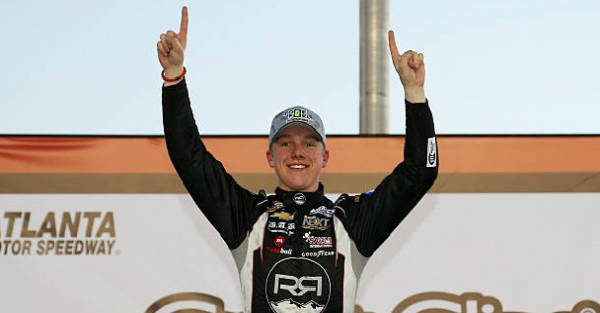 A young NASCAR driver was just promoted from the Camping World Truck Series to the Xfinity Series earlier this week and now it appears he’s already got his sights on the Monster Energy Cup Series.

It was recently announced that John Hunter Nemecheck would be sharing driving duties of the No. 42 in the Xfinity Series with Kyle Larson for Chip Ganassi Racing in 2018.

RELATED: Ganassi reportedly adds another young driver to its stable

"The overall goal is to be in the Monster Energy NASCAR Cup Series, I definitely think we can achieve that goal and this is the next step." –@JHNemechek on his move to @CGRTeams next year. pic.twitter.com/k7LK7Jo38y

During an interview on SiriusXM NASCAR Radio, Nemecheck was asked if he thought it was better to have a partial Xfinity Series season over a full-time Truck Series season and his answer shed light on his plans for the future.

“I definitely think so and this is the next step,” Nemecheck said.

“The overall goal is to be in the Monster Energy NASCAR Cup Series one day,” Nemecheck said. “I definitely think we can achieve that goal and this is the next step.”

He was then asked what challenges he feels he will face during the transition from trucks into the Xfinity Series this season.

“There’s definitely going to be challenges,” Nemecheck said. “I’ve never driven an Xfinity car yet and the trucks definitely drive different compared to an Xfinity car, but we’re going back to a lot of the same racetracks that we ran with the trucks.”

“I’m definitely going to be able to lean on Kyle and Jamie McMurray,” added Nemecheck. “Being able to lean on them to get as much information as I can before we got to our first race.”

He had two wins last season in the Truck Series, with an eighth place finish in the points standings. Nemecheck’s debut in the No. 42 has yet to be determined.