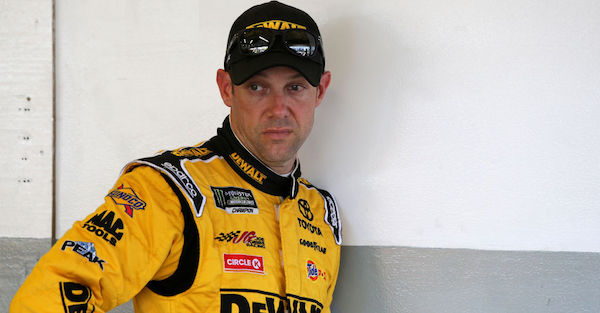 Less than a week after Matt Kenseth told reporters he didn’t think he would be returning to Joe Gibbs Racing in 2018, the team made it official and announced his replacement.

Related: A NASCAR veteran might be getting pushed towards retirement

Joe Gibbs Racing announced that Erik Jones will take over the No. 20 Toyota next season.

He'll replace Matt Kenseth behind the wheel of the No. 20 in 2018! #NASCAR pic.twitter.com/J8FneK6Ata

Kenseth, 45, could still find a sponsor for next season, and it’s possible he could take over for Dale Earnhardt Jr. in the No. 88 car for a year.

The move makes sense for Joe Gibbs Racing considering Jones is nearly 25 years younger than Kenseth and is one of the top young drivers in the sport. Jones is 14th in the standings and on the outside looking in for the playoffs, while Kenseth currently holds the last spot in the postseason standings.

Joe Gibbs said in a news release that he has been a great teammate and asset for JGR.

“Matt has been a tremendous asset to our organization over the past five seasons both on and off the track,” Gibbs said. “He’s been a great teammate and a great ambassador for our sponsors. We have a great deal of respect for him and we are working hard to get the 20 team into the playoffs to make a run for the championship. We have a great deal of confidence in his abilities to do just that.”

Kenseth wants to continue racing next season, and he will likely have to find a sponsor willing to give him a short term deal. Kenseth has 38 career wins, and he won the Monster Energy NASCAR Cup Series championship in 2003.