A NASCAR veteran might be getting pushed towards retirement 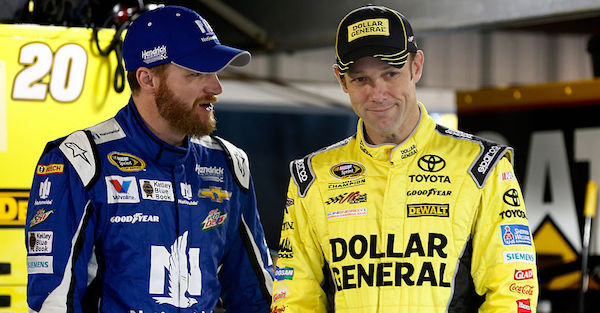 Matt Kenseth is in position to make the playoffs this season, but he might not have a team to drive for in 2018.

Kenseth is rumored to be in the last year of his contract with Joe Gibbs Racing, and the 45-year-old driver said he doesn’t think he will have the option to return to the team according to NASCAR.com.

On 2018, @mattkenseth says he doesn't have a confirmed ride yet and doesn't think returning to @JoeGibbsRacing will be an option. #nascar

Related: A recently retired driver is coming back for two races in a legendary car

“I?m not really worried about it but as of today, I do not have a job for next year,” Kenseth said. “I hope to still be racing. ? I don?t have anything lined up at this moment for 2018. I haven?t worked on anything real hard. But I do not think I will have the option to return to race at JGR next year, unfortunately.”

There is speculation that Kenseth could take over for Dale Earnhardt Jr. in the No. 88 car with Hendrick Motorsports, but he wouldn’t address that rumor and said he’s already, “Said too much.”

Kenseth has 38 career wins in the Monster Energy NASCAR Cup Series, though he doesn’t have a win this season. He is currently No. 11 in the standings, and he would make the playoffs if the season ended today. But if he doesn’t win a race for the remainder of the season, he will likely miss the postseason.

If Kenseth wants to race next season, someone will likely give him the opportunity given how much success he’s had throughout his career. He’s still among the best and most consistent drivers in the sport, and it will be intriguing to see where or if he continues racing full-time next season.