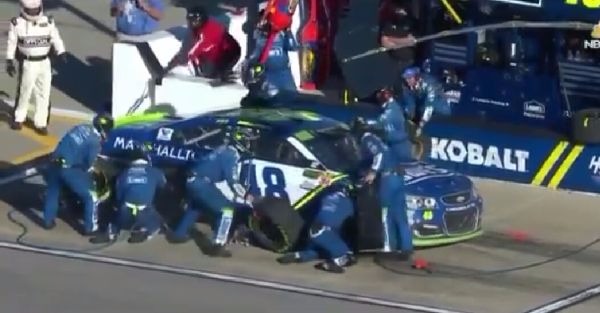 Matt Kenseth got disqualified in today’s Hollywood Casino 400 and is out of the playoffs. That’s not sitting well with some NASCAR fans who perceive a double standard where Jimmie Johnson is concerned.

Kenseth was caught up in a multi-car wreck coming out of turn 2 on lap 197. He managed to make it to his stall on pit road under the damaged vehicle policy, but NASCAR penalized the Joe Gibbs Racing team for having 7 men over the wall working on the damage.

Matt Kenseth is parked for violating the NASCAR damage policy for too many men over the wall! #NASCARPlayoffs pic.twitter.com/ZvUFKtCg8d

Race fans were quick to cry foul when Jimmie Johnson’s team appeared to do the same thing and was not penalized. Johnson pitted under the damaged car policy after spinning out on lap 187. Pit crews members went to work on the car and fans noticed there was a 7th man in the stall. NASCAR rules allow for a 7th man in the stall as long as that person is only servicing the driver and not working on the car.

In a tweet sent out by NBC Sports, it shows the 7th man taking the tear-off off the windshield and then climbing back over the wall, something that is allowed.

Johnson’s team has been the target of criticism lately over situations involving work in the stalls. In Charlotte, Johnson stopped outside of his pit box to allow a crew member to secure lug nuts. Work done outside of the pit box calls for a penalty, but NASCAR ruled that because Johnson partially backed up his car and because the work done was tied to safety, there would be no penalty.