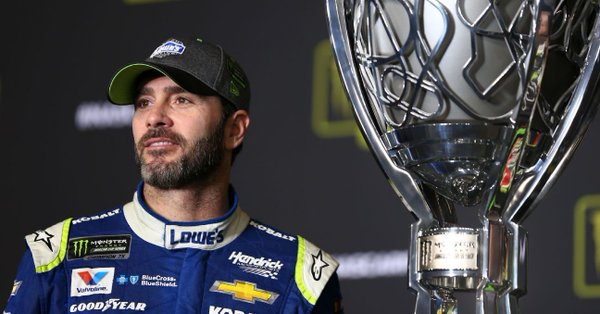 Martin Truex Jr. might have won Sunday’s race at Charlotte Motor Speedway, but much of the talk following the race surrounded Jimmie Johnson and NASCAR’s decision not to penalize the No. 48 Chevrolet for pitting outside of his pit box.

The infraction occurred on lap 280 when Johnson entered pit road in fourth position. His crew performed a seemingly normal four-tire stop, but Johnson slammed on the brakes almost immediately after he tried accelerating out of his stall. The reason he stopped was because the lug nuts were not secure on his front right tire, so a crew member went back over the lugs to make sure they were tight, even though Johnson’s front tires were not within his pit box. Normally, this action results in a 1-lap penalty, but NASCAR’s Senior Vice President of Competition, Scott Miller, recently explained NASCAR’s decision not to penalize Johnson during an interview on SiriusXM.

?It?s funny that this has come up now because it?s high-profile now that the playoffs, we?ve been calling that particular thing consistently over the past couple of years with the lug nut,?? Miller said. ?The way we look at that one is they did their normal pit stop in the pit box. He left. They realized they had a lug nut and at that point to us it becomes a safety issue and allowing them to put the lug nut on. The penalty becomes they lost probably 10 or 12 spots during that pit stop. That?s a penalty.

?We let them do that because we want to make sure that it?s a safe situation out there on the race track. That?s the way we?ve been calling it. We like to give the teams the benefit of the doubt if we can, especially when it comes to something that might create an unsafe situation. That?s the basis for that call. It?s interesting that it?s so high on everybody?s list today when we?ve been calling it for a couple of years now.??

While that explanation might seem good enough for some NASCAR fans, it wasn’t well-received by a couple of high-profile NASCAR commentators who didn’t think it was fair that Johnson’s crew chief Chad Knaus knew of this rule, but other crew chiefs did not, according to a report by NBC Sports.

?NASCAR gets criticized about consistency, this had nothing to do with consistency,? said NASCAR America analyst Steve Letarte. ?I have an issue with communication. ? Chad Knaus is a seven-time champion. If he needs a rule explained in further detail I think all the competitors should get a, ?hey, guess what guys? This was a topic of conversation. If you have questions, come talk to us.?

Whether you agreed with NASCAR’s decision or not, the call allowed Johnson to salvage a seventh-place finish in Sunday’s race at Charlotte, which puts the seven-time champ in good position to advance to the next round of NASCAR’s playoffs.

The next event on the Cup Series schedule will be held at Talladega Superspeedway. The race is scheduled to begin at 2pm on Sunday, October 15th. NBC will handle the broadcast.