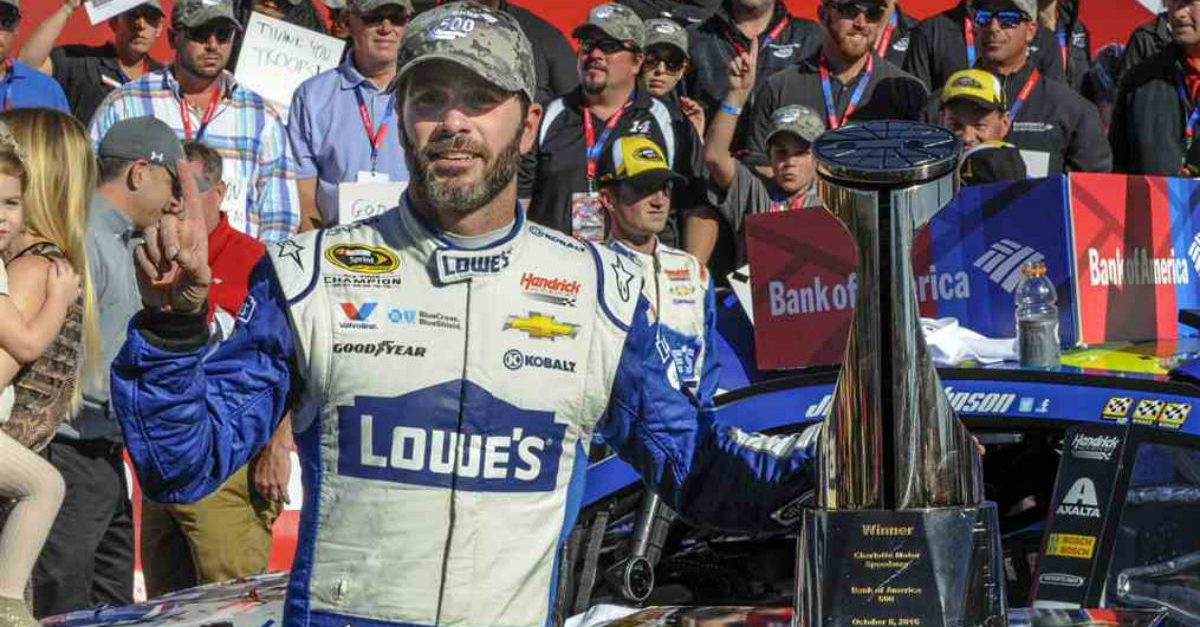 June 4, 2017. This was the last time, at the AAA 400 Drive for Autism at Dover International Speedway, that seven-time NASCAR Cup Series champion Jimmie Johnson, raced his way to a NASCAR victory.

The 44-year-old Hendrick Motorsports driver has racked up 83 career wins and 359 top-10 finishes over the course of his 18 years in the Cup Series, but he’s had quite the cold streak these last two years. Fortunately, Johnson’s struggles on the track haven’t seemed to affect his wallet at all, as a recent Forbes report shows that he is the highest-paid driver in NASCAR for the second time in three years.

Johnson’s total earnings sit at $17.5 million, with $14 million of that coming from salary and winnings and the remaining $3.5 from endorsements and licensing. It’s important to note that Johnson, who formerly had Lowe’s as a longtime sponsor before making the move to Ally Financial, is the last remaining driver making at least $10 million in base salary. These days, Cup Series rookies tend to make six-figure salaries and only a few drivers have base salaries of more than $4 million. You can blame that on the lack of star power in the sport. Gone are the days of Dale Earnhardt Jr., Jeff Gordon, and Tony Stewart.

On top of that, endorsement and licensing earnings have trended down for new drivers, while Johnson’s personal endorsements from Chevrolet, Gatorade, and Seiko also turn quite the pretty penny. Simply put, Johnson, who is under contract with Hendrick Motorsports through the 2020 season, has himself quite the sweet deal.

In case you’re curious (and looking to get green with envy), you can check out the rest of Forbes’ list of top-earning NASCAR drivers below:

You already know that Jimmie Johnson is one of the most accomplished drivers in NASCAR history. The El Cajon, California native has seven NASCAR Cup Series championships, is the winningest active driver, and is sixth place among the ALL-TIME NASCAR Cup Series winners.

Just check out the tracks where he’s the all-time winningest driver:

Johnson has also won nine races at Martinsville and hasn’t had terrible luck at Daytona International Speedway either, having won two Daytona 500s. Staying on tracks, Johnson has won a Cup Series race at every track on the Cup Series schedule except at Chicagoland Speedway, Kentucky Speedway, Watkins Glen International, and The Roval at Charlotte Motor Speedway. Pretty impressive, right?

Then there’s the fact that Johnson has won four All-Star races, was the only driver, up until 2019, to have qualified for the NASCAR Cup Series playoffs every single year since its 2004 inception, and holds the record for the most consecutive and total playoffs appearances (15). I mean, we could go on all day about this guy’s accolades and accomplishments behind the wheel of a race car.

Oh, and we haven’t even touched on what Jimmie Johnson has done outside of racing…

It’s all for a good cause this weekend. Wearing the @blue_bunny #HelmetofHope and special #TeamJJF visor strip. Thanks to the drivers supporting the Jimmie Johnson Foundation and K-12 public education. Hit up the link in my bio or www.jimmiejohnsonfoundation.org to bid on mine or your favorite driver’s helmet visor.

In 2006, Jimmie Johnson and his wife, Chandra, launched the Jimmie Johnson Foundation, which helps children, families, and communities in need of financial assistance. It supports several charities, including Habitat for Humanity, Hendrick Marrow Program, and Make-A-Wish Foundation. In 2007, through his foundation, Johnson opened Jimmie Johnson’s Victory Lanes, which is a bowling alley in Randleman, North Carolina, for campers at Pattie and Kyle Petty’s Victory Junction Gang Camp.

As one of the many events organized by the foundation, the Jimmie Johnson Foundation’s Wellness Challenge hosts triathlons, which Johnson regularly competes in. On April 15, 2019, Johnson showed that he’s not just a one-sport athlete, when he competed in the Boston Marathon for the first time, at the age of 43, clocking in a time of 3 hours, 9 minutes, 7 seconds. Is there anything this guy can’t do?