After a NASCAR team adds a driver, it announces it’s still looking for more 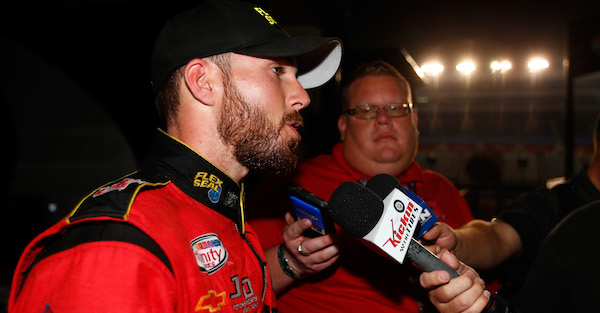 Matt Sullivan/Getty Images
FORT WORTH, TX - NOVEMBER 04: Ross Chastain, driver of the #4 Flex Seal Chevrolet, speaks with the media after being involved in an altercation following the NASCAR XFINITY Series O'Reilly Auto Parts 300 at Texas Motor Speedway on November 4, 2017 in Fort Worth, Texas. (Photo by Matt Sullivan/Getty Images for Texas Motor Speedway)

Coming off of a very successful 2017 NASCAR Xfinity Series season, JD Motorsports with Gary Keller seeks to carry this momentum into the 2018 season. With two drivers confirmed for 2018, JDM seeks two more qualified drivers to fill out the roster.

The team announced in September that Ross Chastain will return for the fourth consecutive year to the No. 4 Chevrolet Camaro, and has now announced that Vinnie Miller will join the team full-time in 2018 to pilot the No. 01 Chevy. Drivers for the team?s No. 0 and No. 15 cars are still to be confirmed.

?My goal for this team is, and has always been, to put competitive racecars on the track every weekend,? said team owner, Johnny Davis. ?To be able to accomplish that, we need two things: sponsorship and talented drivers. I?m very excited to have Ross back with the team, and I see a lot of potential in Vinnie. A great opportunity exists in my other two cars for qualified drivers that can help bring sponsorship. This team had some great finishes in 2017, and I?m aiming even higher for next year.?

?It?s a dream come true,? Miller said. ?As a young racer, you certainly dream of making it to this level and competing with the best of the best, without being sure it will ever happen. I have several people to thank, but mostly importantly, I need to thank my family for their support. The sacrifices they have made to allow me to chase my dreams do not go unnoticed, and it will be really special to share the next step in this journey with them.?

?I see a lot of potential in Vinnie,? said team owner, Johnny Davis. ?He is a hard-working young man, and he has demonstrated his ability as a racer. He?ll have a lot to learn next year, but my team is committed to giving him the resources he needs to have a successful rookie year. Vinnie already fits in great with the team, so we?re looking forward to the 2018 season.?

?I?m really looking forward to joining JD Motorsports with Gary Keller,? Miller added. ?In the ever changing motorsports landscape, to join a team that has raced full-time since 2002 is super exciting, and shows the dedication the organization has to the sport.?