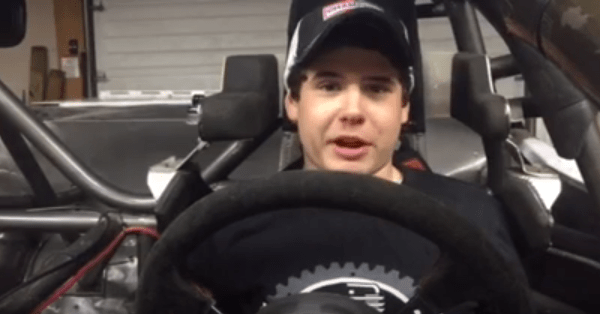 Jacob Perry doesn’t even have his driver’s license yet, but the 15-year-old racer is already using his platform to raise money to fight cancer.

Perry, of Pawcatuck, Connecticut, won a race last year at the Waterford Speedbowl, and he carried the ashes of his late grandfather with him. His grandfather had died of throat cancer in 2015, and he decided to carry his ashes with him as a way to honor him.

Perry’s grandmother had died from lung cancer in 2007, so he decided to raise money and awareness to fight the disease by having the names of cancer survivors and victims on his car while he races.

People can make donations to the charity of their choice, and they in turn can put the name of a cancer survivor or victim on Perry’s car, which is called the “Cancer Warrior.”

Related: NASCAR, at Charlotte, to honor legendary Hall of Famer who passed away this week

Perry’s white, pink and purple car will have over 100 names, and his family estimates that over $2,000 has been donated to charity from Jacob’s fundraiser.

Perry said if he continues to have success racing and can make it higher in the profession, he wants to start his own cancer foundation to raise money.

His father and grandfather were racers, and he won four races at the Waterford Speedbowl last year en route to being named Rookie of the Year. He currently races in the SK Modified division, and he is third in the standings.

Jacob and his dad work on his car themselves, and Jacob balances racing with school and an after school job. The fact that he’s raised so much money to fight cancer is an incredible accomplishment, especially considering that he’s only 15.