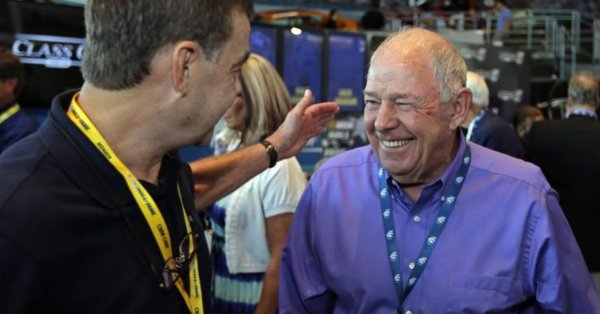 NASCAR Hall of Fame driver Jack Ingram has been badly injured in a car wreck  in his hometown of Asheville, NC.

Ingram’s family reported that the two-time champion in what is now known as the Xfinity Series, is in the intensive care unit at Mission Hospital, according to NASCAR.com.

“We are currently by his side, managing his care with his clinicians and will decide next steps,” a statement from the family read. “We remain hopeful and positive, and appreciate all thoughts and prayers. We will provide updates as information becomes available.”

The incident from the Asheville Police Department indicated that the 2002 Chevrolet Ingram was driving, collided with a 1999 Ford pick-up driven by a 36-year-old man from nearby Henderson, North Carolina. Ingram?s vehicle was struck in the driver?s side door, the report said according to NASCAR.com.

RELATED: NASCAR, at Charlotte, to honor legendary Hall of Famer who passed away this week

The report went on to say Ingram was transported to Mission Hospital with undetermined injuries. A passenger in Ingram’s car was also taken to the hospital after complaining of pain in the right arm. The driver of the other vehicle didn’t sustain any injuries in the crash according to police.

Ingram was inducted into the NASCAR Hall of Fame in 2014, He won the 1982 and 1985 Busch Series (now Xfinity Series) championships and won a total of 31 races in the series during the 10 years in which he competed in it. He also won three championships in Late Model Sportsman division.

Ingram earned the nickname “Ironman” not only for his longevity in the sport, but also for his ability to compete in multiple events in the same week.

No further information is known about Ingram’s condition at this time.