It’s important to be hyper-aware of your surroundings, especially on two wheels 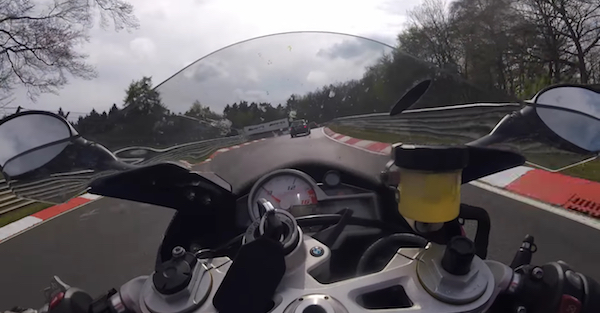 What happens when you use papyrus font for the first 20 seconds of your video? You get hit by a car. Try it, or don’t, depends on if you’d like to be hit by a car.

But seriously, David Monaghan is lucky to be alive. He was speeding down the Nurburgring when he rounded a corner on his BMW S1000RR, saw an opening to pass, and was clipped by a Seat Leon that just wouldn’t obey the rules of the track and stay to the right.

The collision happened at over 100 mph, which would be bad enough, but with Monaghan on just two wheels, the possibility for calamity greatly escalates.

The motorcyclist was somehow able to maintain his balance, even after going through the grass and bouncing off the wall, to continue down the track. For the Seat driver’s part, well, he maintained that he did nothing wrong and made an insurance claim to repair his car, according to Monaghan. Yeah, good luck with that.

Related: Watch the greatest motorcycle save in history