Honda vs Toyota makes for the best racing battle down under 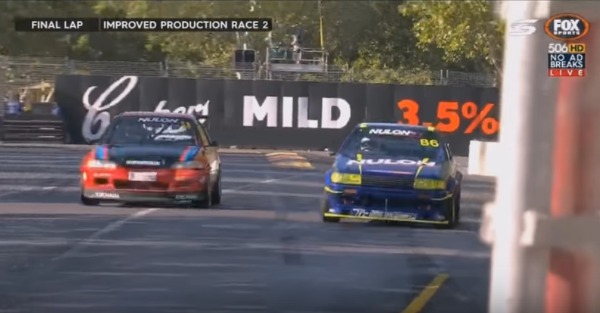 This intense battle for the win comes from Adelaide Street Circuit in Australia in a series called the Improved Production Car Championship. In the last half of the race the Toyota AE86 Corolla Levin and Honda Civic hatchback take turns leading and delivering great racing to the fans.

The Toyota had superior straight line speed and rear wheel drive but, surprisingly, the front wheel drive civic was able to reel it in on the corners. The announcers even mention that people scoffed at the series when it was scheduled but couldn’t help but be amazed at the daring moves.

After a few close calls you can tell that both drivers were going all out in the final lap and were trying to force the other into an error. In the end, the Toyota’s superior straightaway grunt prevailed, but really we all win after seeing such a great battle.