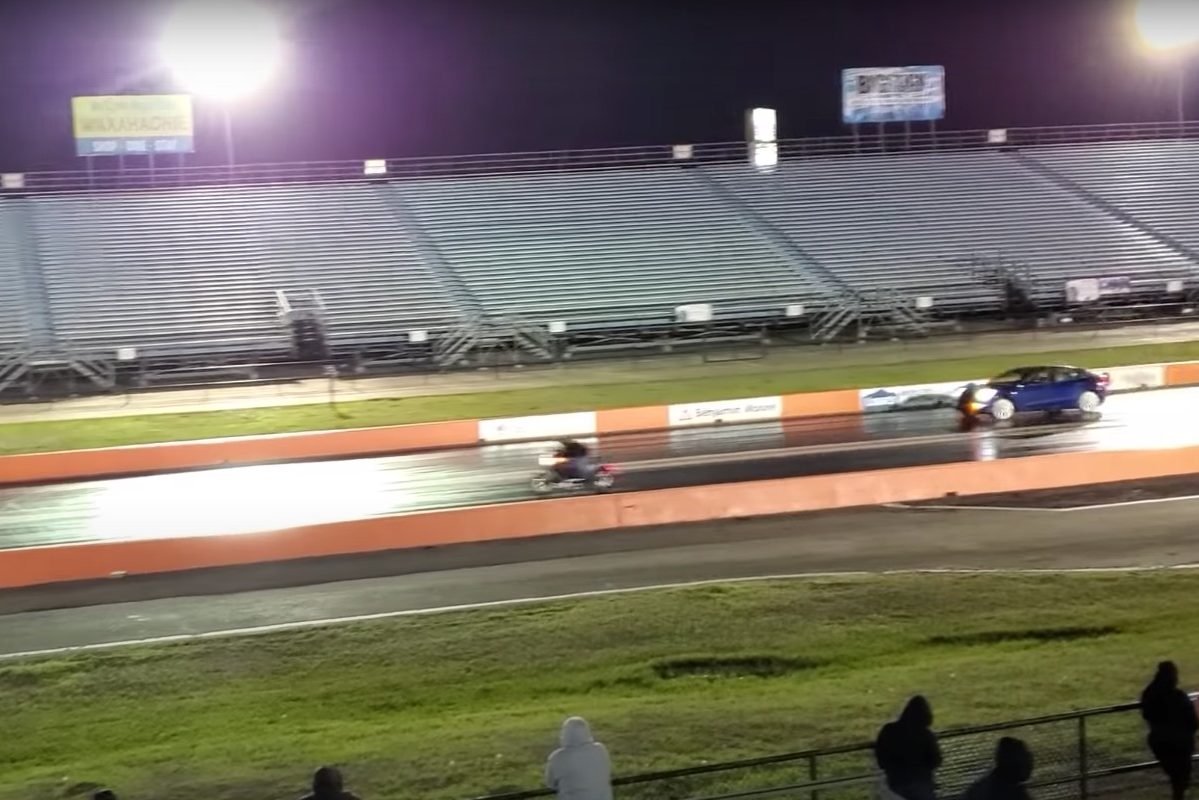 This drag race between a Harley-Davidson LiveWire and a Tesla Model 3 is obviously not your typical race. First of all, both vehicles are electric so it’s completely silent, other than the tires gripping the track and the chatter among the crowd.

It’s kind of weird seeing these two speeding down the track without any engine noise spewing out of them, but I think as the years go on, it will become a more frequent sight. There have been handfuls of videos about the Tesla Model 3 taking down some high-horsepower cars, whereas Harley only somewhat recently jumped into the world of electric motorcycles. Harley doesn’t necessarily classify the LiveWire as a bike that was built for speed, but it’s still interesting to see how it stacks up against the Model 3. Luckily, someone was there to record the Texas Motorplex race on their smartphone.

As the video shows, the electric bike lines up next to the electric car on the drag strip. The staging lights come on and, before you know it, they get the green. The LiveWire gets a much better reaction time off the tree (the electronic starting device between the lanes on the starting line) and speeds into the lead right from the jump.

While the two take off down the quarter-mile, it almost looks as if the Harley LiveWire has it in the bag. It’s kind of hard to beat the bike’s power-to-weight ratio. Surprisingly, however, about halfway down the track, the Tesla appears to start reeling him in. Unfortunately, the video actually cuts off right as the two approach the finish line, which was a bummer, because it looked like it would be a seriously close finish!

Not knowing the end result didn’t really cut it for me, so I did some digging and found the official times. The winner of the photo-finish race turned out to be the LiveWire. This matchup was actually closer than I had anticipated. The LiveWire ended up with a quarter-mile time of 11.6 seconds at 110 MPH. The Tesla was right behind the bike with a time of 11.7 seconds at 114 MPH.

This electric drag race came down to the very end. As much as I loved to see the bike win that race, I’m pretty sure had the Tesla been a little quicker off the line, he would have won the contest. Why? Because the top speed on the LiveWire is electronically limited to 110 MPH from the factory. He was maxed out by the end, and the Tesla managed to just about close the gap between them in that time. If the Tesla got even a slightly better reaction time, I think it’d take home the win on that race. Either way, that was some good drag racing!