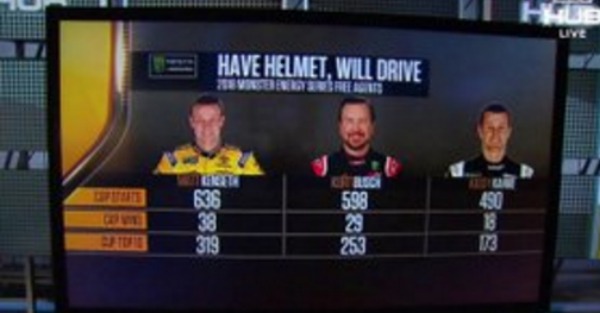 All of a sudden, Furniture Row Racing is the shiny new penny in NASCAR.

That’s because team has something few others have — an open seat in 2018.

With Erik Jones moving to Joe Gibbs Racing next season, FRR can have its pick of drivers. It can decide to go young, as Hendrick MotorSports did when it replaced Kasey Kahne with 19-year-old William Byron; or it can take its pick from a number of veteran drivers already on the market, including Kahne, Matt Kenseth and Kurt Busch. There’s also a chance Danica Patrick and Aric Almirola could be on the market, too.

FRR president Joe Garone told NASCAR.com that he’s gotten a lot of interest in the No. 77 Toyota.

Garone didn’t name names, but the the list of available drivers is impressive. Who do you think would be the best option for Furniture row next year (let’s assume Kurt Busch goes back to driving the No. 41 Ford Fusion for Stewart Haas Racing).