It looks like we have our next great NASCAR feud, and that’s a good thing 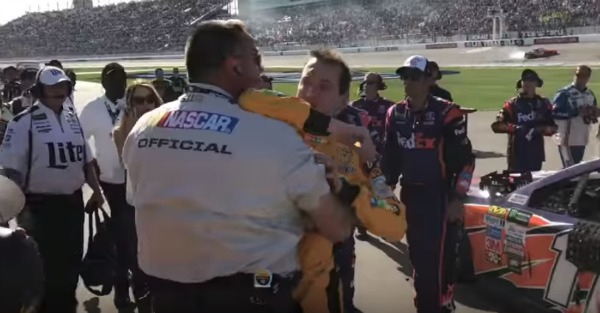 Who doesn’t love a good rivalry?

Whether it’s Green Bay/Chicago, Sox vs Yankees, Penguins taking on the Red Wings, teams or players that just plain hate each other makes the games that much more fun to watch.

The same goes for racing. Sure, you follow your favorite driver. But aside from them, you mainly watch for the drivers who will go after each other. Admit it, you want to see what will happen.

NASCAR has had some fantastic rivalries over the years. Yarborough vs the Allison brothers, Earnhardt, Sr. vs Waltrip and then Earnhardt, Sr. vs Gordon, Stewart vs Kenseth, Kyle Busch vs the flavor of the month. Busch seems to have enough vinegar to go around, whether you’re Brad Keselowski or Joey Logano or Kevin Harvick. You know what I’m talking about. Don’t get me wrong…these are not one-sided affairs. As the saying goes, it takes two to tango.

RELATED: The Denny Hamlin-Chase Elliott feud goes to a new level with these comments

That’s what makes the Denny Hamlin/Chase Elliott feud so good. Hamlin, as the veteran, knows how to work up other drivers. He’s had his share of dust-ups with opponents. His feud with Brad Keselowski was a great backdrop to the 2008 season. And now Hamlin is turning up the heat on Elliott, saying this past week in Vegas:

“The way we race each other has been set and will be set for a while.”

Translation – Elliott should get used to looking over his shoulder on the track. This all goes back to when Hamlin spun Elliott at Martinsville when it looked like Elliott was going to win his first Cup race. Then Elliott retaliated in Phoenix, driving Hamlin into the wall and flattening his tire. Elliott showed he can more than handle the crap Hamlin throws his way. His composure is beyond his 21 years and he’ll give as good as he gets.

Hamlin was recently quoted as saying “At this point in my career, it’s championship or nothing.” Don’t look now Denny but you’ve got Chase Elliott ready and happy to make sure you get nothing.