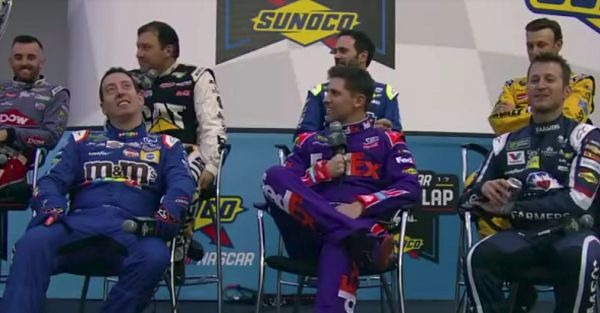 Just when you thought you heard the last of the drama between Denny Hamlin and Chase Elliott, the driver of the No. 11 Toyota Camry said something else throwing gas on the fire of their ongoing spat.

Speaking when reporters during Champion’s Week in Las Vegas, Hamlin was asked what fans can expect from the two drivers in 2018.

Hamlin replied by saying, “The way we race each other has been set and will be set for a while.”

In case you’re unfamiliar with the reason why Hamlin and Elliott aren’t the best of friends, it dates back to the October race at Martinsville where Hamlin spun Elliott’s car with three laps remaining. Elliott was leading the race and was in prime position to pick up his elusive first victory in the Cup Series.

Two weeks later at Phoenix, Elliott made contact with Hamlin’s car, causing damage that eventually led to a flat tire, which resulted in Hamlin finishing 35th.

While Hamlin finished the year with two wins and a 6th-place finish in the point standings, the 37-year-old driver says those type of results won’t be good enough in 2018.

?I feel real good about our finish, but any year we don?t win a championship, it?s not satisfactory enough,? Hamlin said, according to NASCAR.com. ?At this point in my career it?s championship or nothing. You need to make the (Championship 4) to do that. We didn?t, but we performed good enough to make it there. Things just didn?t work out.

?We have to do everything we can to get as many playoff points through the regular season as possible next year. Start the year off quicker and solidify ourselves as a guy who wins stages and wins races early in the season.?