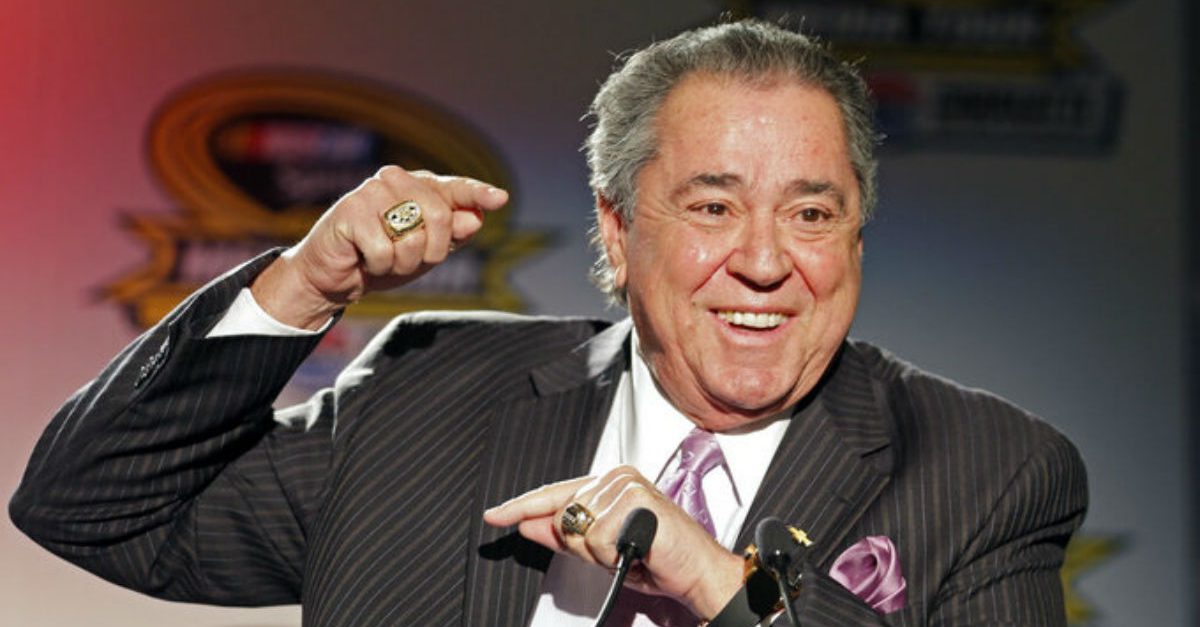 CHARLOTTE, N.C. (AP) — In his den overlooking the 14th hole at Quail Hollow, there are a handful of reminders of Felix Sabates’ 30 years in NASCAR — a photo of the team owner at one of his first races; a bobblehead of close friend and rival Rick Hendrick; in the corner, a replica of the Monster Trophy won by Kyle Larson in October at Dover.

It’s the final trophy Sabates will earn in racing.

Sabates on Thursday was honored at Chip Ganassi Racing, where he has cashed out as a partner and waved the red flag on his racing days. One of NASCAR’s biggest personalities, a Cuban refugee who came to the United States at 15 and truly made good on the American dream, is calling it a career.

“Champagne and tears. Remember the years,” Sabates told The Associated Press during an interview at his home in the golf community that hosted the 2017 PGA Championship.

Sabates means that very literally. He launched SABCO Racing in 1989 with Kyle Petty as his driver and over 12 years the small team won seven races — six with Petty, one with Joe Nemechek — before he sold controlling interest in the team to Ganassi before the 2001 season.

After 33 years in the industry, Felix Sabates will retire from motorsports in 2020.

The organization was re-branded as Chip Ganassi Racing with Felix Sabates, and now has 50 wins in NASCAR including victories at the crown jewels Daytona 500, Brickyard 400 and NASCAR’s All-Star race. He also coaxed Ganassi into sports car racing with backing from Mexican billionaire Carlos Slim and the IMSA teams won 64 races — eight in the Rolex 24 at Daytona — seven series championships and wins at the 12 Hours of Sebring and 24 Hours of Le Mans.

There was plenty of heartache along the way: Sabates was still reeling from the death of 19-year-old Adam Petty in May 2000 when Kenny Irwin was killed driving Sabates’ car two months later. Among those who flew with Sabates to Irwin’s funeral was young driver Blaise Alexander, who drove Sabates’ Busch Series car.

Sabates recalled Alexander sobbing alone, leaning against a tree, and a sadness in Alexander’s eyes on the flight home that Sabates to this day can’t shake. Less than a year later, Alexander was killed in a crash at Charlotte Motor Speedway at age 25.

He sat in silence with Hendrick and Hendrick’s wife that night in 2004 after a Hendrick plane crashed on its way to a race in Virginia, killing 12 — including Hendrick’s son, brother, twin nieces, friends and top executives.

“I say champagne and tears because you wonder sometimes if you contributed to this, if racing, if giving these kids a chance to race, killed them,” Sabates said. “There’s been a lot of a pain in this journey.”

The journey was also fun for the gregarious Sabates, who quickly forged a tight friendship with Hendrick, the late NASCAR chairman Bill France Jr. and vice chairman Mike Helton. They fished in the Bahamas, shared expensive wine and marveled at each other’s watch collections. Sabates remains a staunch supporter of France’s son, Brian, who was ousted from NASCAR in 2018 from the family business following an arrest on drunken-driving charges and feels a sense of duty to stay connected to his late friend’s son.

“Where do you even begin to describe Felix Sabates?” Ganassi said. “He’s done so much for the sport of racing. I teamed up with him almost 20 years ago and he’s been a great business partner and an even better friend.

“In that time the only thing we’ve had an argument over was who was picking up the tab at dinner. Felix helped me develop as an owner as well as an individual. His track record in this sport certainly sets the bar high for anyone that follows.”

Sabates is the last member of the Charlotte Hornets’ original ownership group who still holds a stake in the team under Michael Jordan. He’s worked tirelessly to help build the city where his family settled in the mid-1960s. He was a salesman at City Chevrolet, long before it was the dealership Hendrick purchased as the launching pad for his Hall of Fame march through NASCAR.

The money-making was easy for Sabates, who in 1969 moved to Top Sales Co. as a salesman and five years later he purchased the company that distributed Atari game consoles and Teddy Ruxpin teddy bears among its $12 billion in annual sales. He bought car dealerships, property and in 1988 a Hatteras Yacht dealership in Stuart, Florida, that within two years grew into the largest Hatteras dealership in the world.

Among his philanthropic contributions and honors and awards for his generosity are a dining hall named for him at Belmont Abbey College. The Felix Sabates Athletic Center was dedicated in Fort Lauderdale in 2000 and the facility is the largest Boys and Girls Club in Florida.

Now 75, Sabates has battled declining health issues the last several years. He spent weeks in a coma three years ago, is suffering from congestive heart failure and is limping these days from a broken ankle suffered last week when he jumped off one of his boats in Florida.

“I’ve really abused my body, physically, mentally, having too much fun,” Sabates said.

Sabates sold 80% of his remaining interest in the team to Rob Kauffman, who is now Ganassi’s primary partner. The move led to the eventual removal of “with Felix Sabates” from the team name, a snub that to this day leaves Sabates with a bitter taste.

“I am very well-known in the business world and from that day forward, my heart has never been in the team as much as before,” Sabates said. “I felt that I had been demoted. I was a great soldier. Chip is still the boss and if the team has prospered financially since the day my name came down, then that is great.”

The removal of his name is not what led him to cash out entirely with Ganassi, but he said he’s ready to have fun on his yacht in Florida, scale his businesses down to just three remaining dealerships and downsize his Charlotte home; he figures he might just buy the Quail Hollow home of Ron Rivera, the recently fired coach of the Carolina Panthers and a close friend.

So it will be from afar that Sabates supports the Ganassi organization going forward. He said he doubts he will ever go to another race but will continue to cheer for Larson and Kurt Busch to win races.

“I have had a great friendship with Chip for almost 20 years and other than who was to pay for a bottle of wine, we have not have many disagreements,” Sabates said. “I don’t have to worry about anything anymore other than to pull hard for Kurt and Kyle, as well as the team to do well and for Chip to enjoy financial success and win. He works hard and put his heart and soul into his race teams and he deserves it.”

Read More: That Time Dale Earnhardt Jr. Got Jeff Gordon out of a Speeding Ticket