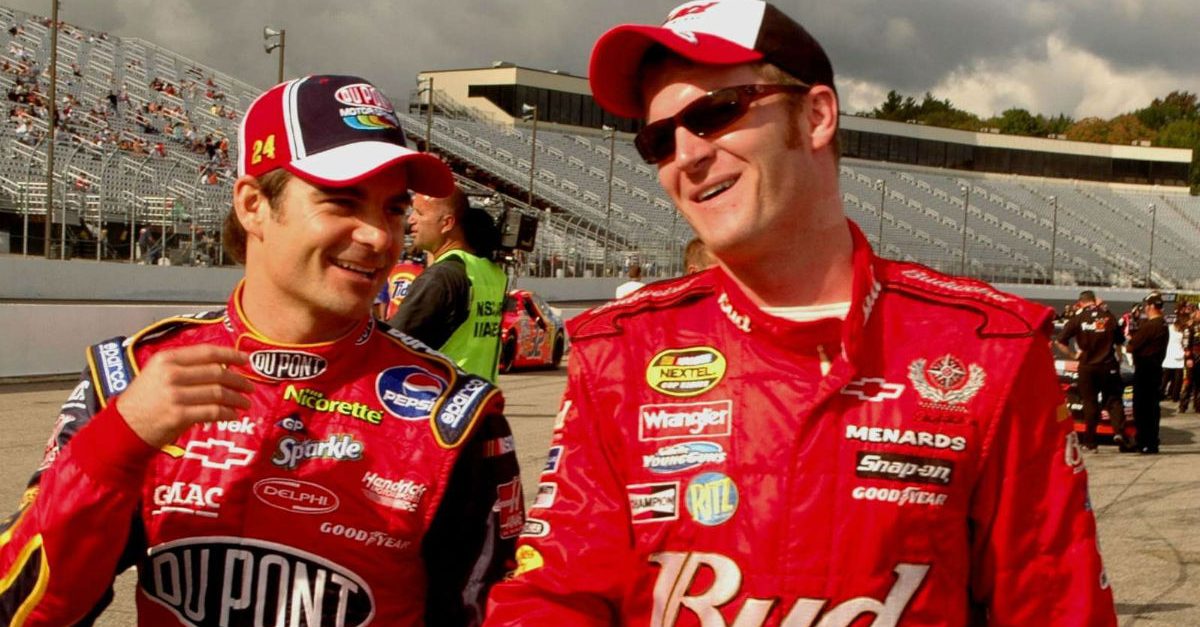 From Richard Petty to Joey Logano and everyone in between, NASCAR drivers are pretty much fueled by one thing: The desire to go really, really fast.

Now, once they get off the track, that need for speed doesn’t just go away. The only issue is that now they’re forced to abide by the rules of the road, which makes it a lot harder to push 100 MPH and not get noticed for it. This makes NASCAR drivers especially susceptible to speeding tickets.

Even the famous drivers get cited for speeding every now and then, and as Jeff Gordon revealed back in 2018, he would’ve gotten a speeding ticket himself back in 2007. Had it not been for none other than Dale Earnhardt Jr.

During a Q&A segment for an episode of the Dale Jr. Download podcast, the former driver of the No. 24 Chevrolet revealed that the incident happened right as Junior was moving over to Hendrick Motorsports, and a congratulatory call ended up quickly turning into Gordon asking a favor of the two-time Daytona 500 winner.

Read More: This Jimmie Johnson Hater Earned Himself a Slap for this Aggressive Stunt During a Sprint Cup Race

?I was driving to dinner and I said, I?mma call him. And I didn?t have the hands-free set up in the car, so I just call him. So I?m driving along, on the phone, we?re talking, I?m congratulating you and welcoming you to the team, and it?s cool. You picked up, and we?re having a nice conversation. And all of a sudden, I?ve got blue lights in my rear window, and I?m like, ?Uh oh, I?m getting pulled over.?

?So, I wasn?t sure if I should stay on the phone with Dale or not, but I said, ?No no, stay on here. I may need you.? And luckily I did because first, the guy says to me, ?You know you?re not supposed to be on a cellphone.? And then second, he?s like, ?And you were speeding.? And I just said ? and I never do this, but I said this is the moment I?ve got to pull this off.

?I said, ?I know, I?m sorry. You don?t happen to be a Dale Earnhardt Jr. fan, are you?? And he?s like, ?Well yeah, why? What does that have to do with anything?? And I said, ?Well I?ve got him on the phone. I was congratulating him on something.? And he goes, ?What?? And I just handed the phone off and you spoke to him for two seconds and got me out of it!?

Earnhardt, who retired as a full-time NASCAR Cup Series racer in 2017 and currently works as an NBC commentator, later added, ?I was just trying to make a great impression on my new teammate. This guy?s the senior authority over there, and so that worked out great for me.?

To which Gordon, a NASCAR Hall of Famer, responded, ?He made the greatest impression on me.”

But, the friendships that develop between NASCAR drivers can sometimes outweigh the heated rivalries. Emphasis on sometimes.