After a run of bad news, BK Racing finally has something positive to announce 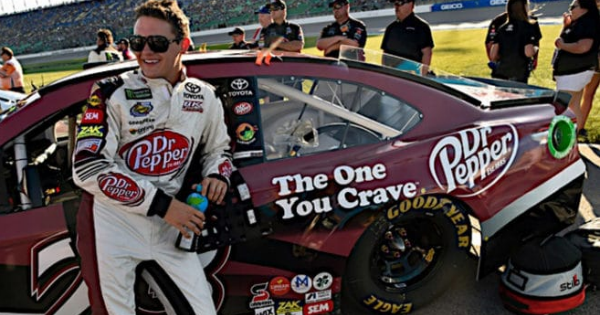 The team, on driver Gray Gaulding’s website, announced that is has a sponsor for the No. 23 at the Daytona 500.

Health and wellness company Earth Water will be the sponsor.

”BK Racing is excited to have EarthWater return as a sponsor for the 60th Annual Daytona 500.  To have EarthWater on the No. 23 Toyota Camry, with Gray Gaulding  behind the wheel for the Daytona 500 is a match we look forward to seeing again, team owner Roon Devine said in the press release.

It’s a welcome respite from the spate of negative news the team has suffered this off season. It had some of its equipment added to an auction page (since removed) to help settle a tax debt. It’s embroiled in a dispute with a bank over its debt. It’s driver, Coey LaJoie, left for Tri-Star Racing and crew chief Doug Richert left, too.

Big issue or not, the bad news has certainly had an impact. While BK Racing will race the No. 23 at Daytona — and says it plans to race the car in all 36 Cup Series races — it just last week named Gaulding as its driver. The team also still have the No. 83, but Devine doesn’t know whether it will see the track this season.

“God bless NASCAR for putting up with all the nonsense around us,” he said. “I’m so grateful. My goal this year is to clean that up.”

All of this comes against the backdrop of continued financial issues plaguing the team. It faces a hearing in court in which Union Bank and Trust has asked a court to appoint a receiver to operate the team, according to an ESPN report. By doing so, the bank could then sell or lease BK’s charter. which would recoup some of the money the bank says the team owes.

Daytona Beach, FL (February 13, 2018) – EarthWater www.EarthWater.com, a Texas based health and wellness company that produces High-Alkaline Mineral beverages which contain a proprietary blend of Fulvic/Humic with Trace Minerals for healthy hydration and powerful antioxidants, and is exclusively sold internationally on Amazon.

Ron Devine, President of BK Racing stated, ”BK Racing is excited to have EarthWater return as a sponsor for the 60th Annual Daytona 500.  To have EarthWater on the No. 23 Toyota Camry, with Gray Gaulding http://www.graygaulding.com/ behind the wheel for the Daytona 500 is a match we look forward to seeing again.”

During the 2017 season EarthWater was the Official Water of BK Racing for the NASCAR season, and we’re excited to continue our sponsorship into the 2018 season.

”Our partnership with BK Racing means more to us than racing, they’ve become part of our family. That’s how we see BK Racing and NASCAR, it’s a collaboration. It’s a perfect fit. We are excited to be on the #23 car and to stand behind Gray Gaulding on and off the track,” stated Cash Riley, President of EarthWater.

Fans can watch Gaulding on The Country Network in a featured “On The Rise” segment.  Gaulding tells race stories and introduces music videos by artist that inspire, energize and motivate him. Even an artist from his hometown. Catch this special feature “On The Rise” with Gray Gaulding: Wednesday 2/14 at 11am Eastern; Friday 2/16 at 10am & 8pm Eastern; and, Sunday 2/18 at 4pm & 8pm Eastern. (www.TCNcountry.com click on WATCH LIVE at the above dates and times)

The Daytona 500, known as “The Great American Race”, is a 500-mile-long (805 km) Monster Energy NASCAR Cup Series motor race held annually at Daytona International Speedway in Daytona Beach, Florida. It is the first of two Cup races held every year at Daytona, the second being the Coke Zero 400. It is one of the four restrictor plate races on the Cup schedule. The inaugural Daytona 500 was held in 1959 coinciding with the opening of the speedway and since 1982, it has been the season-opening race of the Cup series.