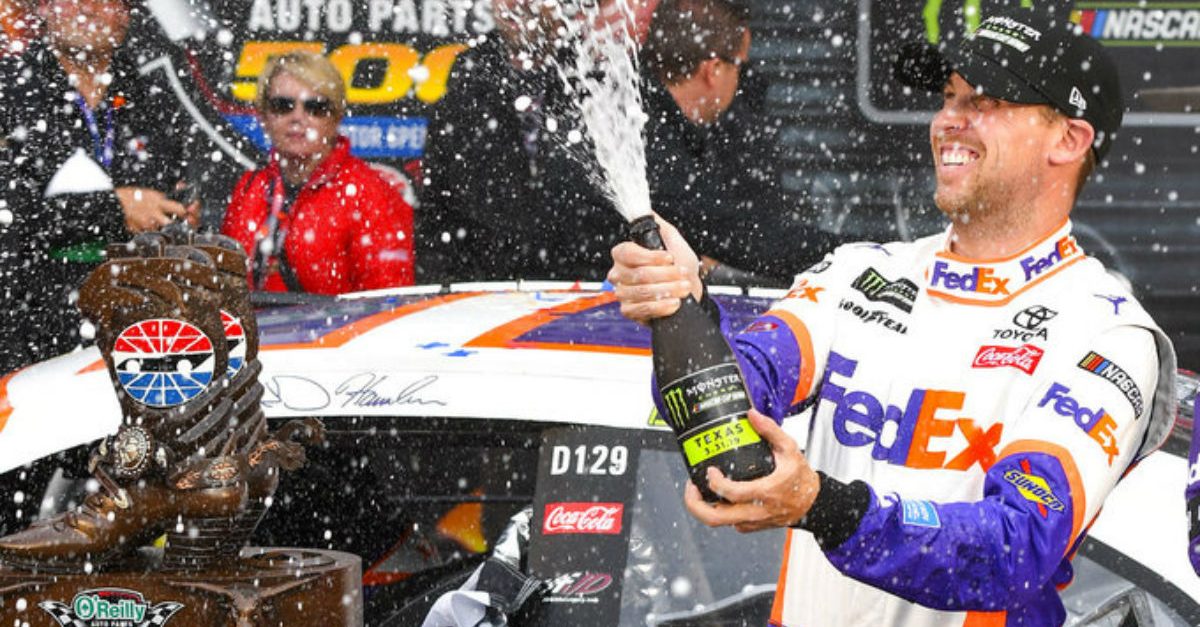 FORT WORTH, Texas (AP) ? Denny Hamlin had such a fast car at Texas that he was able to win even after two penalties on pit road and some other issues during green flag conditions.

While Hamlin was reviewing all that happened, crew chief Chris Gabehart interrupted ? “I think you passed 327 cars by my count, but maybe not,” he said.

Hamlin, who once missed the entry to pit road and also ran out fuel during the race, did do a lot of passing to get to Victory Lane on Sunday. He led the final 12 laps and 45 overall to overcome those miscues and the penalties ? one when he exited pit road too fast early in the day and another for a debatable tire violation against his team during a stop just past the halfway point.

“I was just beating my head against the steering wheel thinking, ‘Man, we’re going to finish bad with a really fast race car,'” Hamlin said. “We just kept digging and Chris kept doing a good job encouraging us. We had a long way to go. We kept passing cars and passing cars.”

Hamlin’s No. 11 Toyota finished more than 2.7 seconds ahead of Clint Bowyer . The 334-lap race at the 1 ½-mile track, with only three cautions outside the two stage stoppages, featured 27 lead changes among 13 drivers.

It was the 33rd career victory for Hamlin. He won the season-opening Daytona 500 after he went winless last year and ending a streak of 12 consecutive seasons getting into Victory Lane.

His third win at Texas was his first since sweeping both races at the track in 2010.

Gibbs drivers have won four of the seven races this season, and Team Penske won the other three.

Erik Jones, another Gibbs driver, finished fourth and polesitter Jimmie Johnson was fifth, just ahead of his Hendrick Motorsports teammate William Byron. Kurt Busch was ninth and JGR driver Kyle Busch finished 10th despite leading a race-high 66 laps in his attempt for a tripleheader weekend sweep.

Kyle Busch led six times, and was still in front with 59 laps to go when his No. 18 Toyota drifted high going into Turn 2.

“It just busted loose on me, and I had to catch it and make sure we didn’t crash,” he said.

While he avoided contact then, he slipped back to fourth. When trying to get back in front a few laps later, he brushed the outside wall and fell a lap behind after having to go to pit road.

For the second time in a month, he missed out on a tripleheader sweep following Xfinity and Truck Series races in the same weekend. He completed such sweeps twice at Bristol, in 2010 and 2017.

It was the third time at Texas that Kyle Busch won the Xfinity and Trucks races before coming up short in the weekend-ending Cup race. That also happened to him at his home track in Las Vegas four weeks earlier.

While Johnson’s career-worst winless drought reached 66 races, he started from the pole for the first time since 2016 and his 61 laps led were more than he had combined since the start of 2018.

Johnson led 40 laps all of last season, and only four in the first six races this year. The No. 48 Hendrick Motorsports Chevrolet last went to Victory Lane in June 2017 at Dover.

“We are definitely moving in the right direction. Car was good in clean air and had a lot of speed in it, so I think we have found kind of center for our cars and what has to happen,” Johnson said. “We’ve had a lot of pressure on us, and everyone has stepped up and is getting it done.”

Along with strong finishes by Johnson and Byron, Chase Elliott was 13th. Alex Bowman was 18th in a backup car.

“I feel much better about things,” Johnson said.

Joey Logano and Brad Keselowski have the three wins for Team Penske this season, but it was a tough day at Texas.

Logano won the first 85-lap stage, and was the only driver who had scored in every stage this season. That scoring streak ended in the second stage, when he slipped to 15th after a penalty on pit road.

Our No. 22 @ShellMotorsport @Pennzoil @FordPerformance was fast at the start, but unfortunately some late car issues resulted in a 17th place finish. On to @BMSupdates #TeamJL pic.twitter.com/whmbdd62yL

There were also issues with a loose hood wavering on the windy day. Logano, who won at Las Vegas, finished 17th at Texas, two spots ahead of teammate Paul Menard.

Brad Keselowski, a two-time 2019 winner coming off a victory at Martinsville, was scrubbing tires for the restart before the second stage when “something in the back of the car broke.” After extended time to repair the car, he got back out and finished 36th in the 39-car field, 55 laps behind Hamlin.

Ryan Blaney led 45 laps in his Penske Ford, but finished 37th because of overheating after 225 laps.

Two cars from each manufacturer were being taken by NASCAR to a wind tunnel for an in-season evaluation. The Chevrolets are the Chip Ganassi No. 1 car of Kurt Busch, and No. 24 of Byron; the Fords are the Stewart-Haas No. 4 of Harvick, and the Wood Brothers No. 21 of Paul Menard; and the JGR Toyotas for No. 19 Martin Truex Jr. and No. 20 Jones.

NASCAR is headed to Bristol, where the Busch brothers have a combined 13 wins ? seven for Kyle, six for Kurt. No other active driver has won more than twice at that short track. Kurt Busch won the second Bristol race last August, after Kyle Busch won the previous two races there.