Defending Kentucky Speedway winner knocked out of this year’s race 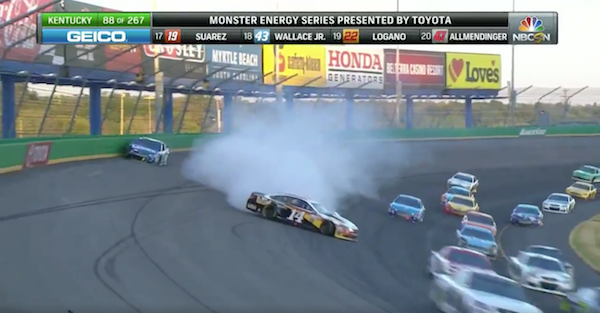 Brad Keselowski’s chances of defending his win at Kentucky Speedway for the Quaker State 400 ended after he crashed during Lap 88.

The crash occurred on the restart, and it involved Jimmie Johnson, Clint Bowyer and Keselowski.

Related: Brad Keselowski had some interesting things to say about his NASCAR future

Brad @Keselowski won't be defending his win from last year at @KYSpeedway. He explained what happened. #NASCARonNBCSN pic.twitter.com/pGqC1BwwuJ

“I knew I was in a bad spot,” Keselowski said after the race. “I was trying to lay up, but there’s only so much you can lay up here or you’ll get ran over from behind.”

Keselowski wasn’t the only driver whose day ended early. Kasey Kahne and Trevor Bayne were involved in an accident that knocked Kahne out of the race for the fifth time in the last seven races.

#NASCAR. This is the 5th time in the last 7 races @kaseykahne has had a DNF because of an accident.@NASCARonNBC

Keselowski is already in the playoff field, so he doesn’t have to worry too much about Saturday’s outcome. But Kahne’s season has been a big disappointment.