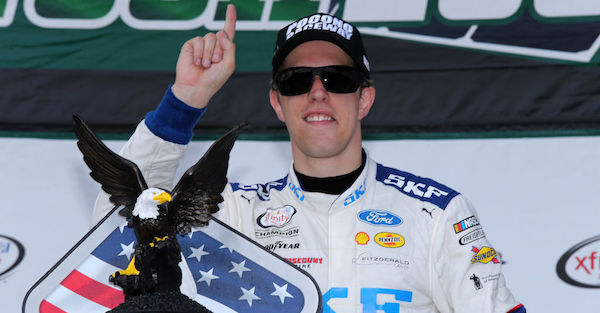 Brad Keselowski has won two races in 2017, and having done so, has clinched a spot in the postseason. The 2012 Monster Energy NASCAR Cup Series champion is one of the top drivers in the sport, and he is also good for an entertaining interview when he’s not behind the wheel.

Keselowski participated national teleconference, and he addressed a variety of topics in the process.

The most noteworthy comment was about his current contract status. Keselowski’s contract with Team Penske is set to expire after the 2017 season, and he was asked whether the two sides have negotiated a new contract. He said he hopes to have the answer to that question “very, very soon,” and he hopes to be able to continue with Team Penske.

Keselowski was also asked about taking over the No. 88 car when Dale Earnhardt Jr. retires, but he didn’t seem particularly interested in changing from the No. 2 car for Team Penske.

He also discussed how great it was to drive for Junior’s team before joining Penske, and he said he wasn’t sure if he would’ve made it without Earnhardt Jr.

Related: Dale Earnhardt Jr. has his own list of current drivers he roots for

Perhaps the most intriguing comments Keselowski made were in regards to concussions. He was asked if his outlook has changed due to being a family man:

“Right now you’d be almost foolish to be an athlete in sports who has a wife and kids and not have the concussion discussion as a family, because we’re all seeing that quite frankly there are athletes out there that are either dying or suffering severe loss of quality of life in the latter years of either their career or so forth.”

“And so when you have a family, you have a tremendous responsibility to look out for them.  So it does play a role and it’s a family discussion, for sure. I’ve had that conversation with my wife and family and I feel good about continuing to go on and do all those things in the latter years of my career, which hopefully I have a decade or so left to perform.”

Other tidbits from the interview included Keselowski saying Team Penske will have success at Daytona because the team has had success in the past with restrictor-plate tracks.

Keselowski addressed Jimmie Johnson’s wreck Sunday at Pocono that occurred due to brake failure. Keselowski broke his ankle in 2011 after his brakes failed, and he said it is the most terrifying accident to have as a driver because there’s nothing you can do about it.

Keselowski will look for his third win of the season Sunday at Michigan International Speedway.