NASCAR has a big problem on its hands 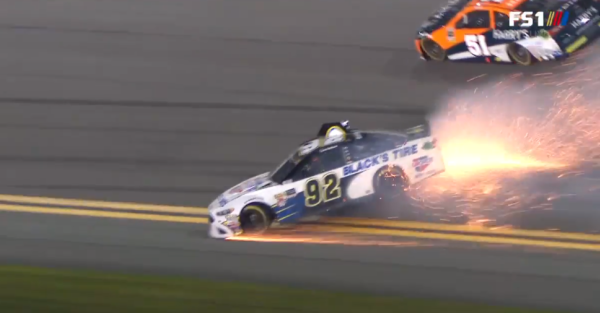 The Can Am Duels determine starting positions for the Daytona 500, but they also give us two extra looks at what racing at the main event will look like.

All during the first race, Ricky Stenhouse Jr had been ultra aggressive. His big moves even had FS1’s commentators speculating that he might just be experimenting with a strong race car. All that experimenting exposed what could end up being a big problem for NASCAR.

As Stenhouse made a move on David Gilliland, he got right up on the number 92’s rear quarter panel and Gilliland lost control.

Gilliland was not happy about the move, and was heard saying over the radio about Stenhouse: “He’s an idiot. He’s won two of these thing and now he’s a hero…”

But here’s the rub, or lack thereof: There was no contact between the cars. Even the broadcast booth was incredulous, but it was the second time it happened just in this race.

The loose nature of the rear ends of these cars thanks to NASCAR’s new ride height rules combined with the side draft effect means that a driver can almost make a rival lose control at will without even making contact.

It happened again in the second duel, and you could see it coming from a mile away:

If teams don’t figure out how to get more grip in that rear-end, or negate the loose condition brought on by the side draft, drivers will have another weapon to settle a beef with the added deniability of not even making contact.

If that is the case, we could see a huge increase in these types of crashes where the crashed driver feels like he was taken out when it would be near impossible to prove intent. This creates great drama for fans, but a headache for NASCAR as they will have no way of knowing if any sort of discipline would be necessary in some future incident.

Related: Jimmie Johnson can’t catch a break at Daytona and is involved in another big crash