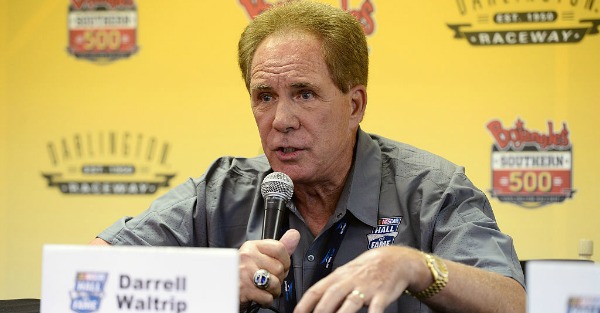 Darrell Waltrip moved from the car to the booth in 2001 after his racing days were over, taking advantage of his gift for gab. Now that he is on the broadcasting side of things, he has come up with a way to reverse the ratings slide. In an interview with The Charlotte Observer, DW laid out his plan.

First, Waltrip wants NASCAR to let drivers be who they are. The rivalries are half the fun and DW says that, half the time, drivers are afraid to be the bad guy because of backlash from the fans, owners and especially the sponsors. If villains were allowed to do their thing without fear of losing their ride, rivalries would spring up and bad blood would energize the sport. DW even went as far as saying sometimes, he would play the bad guy just to be different:

?I said, ?If there?s already a good guy, I?ll be the bad guy.? What I wanted to do for myself and my career was to stand out. And so if they are all wearing white hats, I?ll wear a black hat.?

The second part of his plan involves something many fans have been clamoring for already: Shortening the race season. DW would rather have an even 30 races for points instead of the current 36. When asked which tracks he would cut, Waltrip said that he didn’t have a set list but he would make tracks bid for the right to hold the races. He continued:

?You want to race? Good. Here are the dates we have open. The highest bidders ? that?s who gets the race. If Iowa wants a race and bids more than New Hampshire does, than Iowa gets that race.?

In addition to shortening the schedule, he would also shuffle it around. Waltrip believes that grouping similar races creates more friction between drivers which, again, plays to the rivalries. He says:

?If you put three short-track races together, that means three straight tracks where you can get p—– off and get even with somebody,?

Also schedule related, DW would make the last race of the year be held in Las Vegas since the end of year awards banquet is held there anyways. He has a point, explaining:

?I would move it to Vegas and here?s why: We stretch everything out. We think more is more. Less is more. We finish the season out there ? all three series ? and we have the banquet out there on Monday. We?re already in Vegas. We don?t need to go back to Vegas. That?s what makes the most sense.?

Finally, Waltrip wants to simplify the rules. He knows that it is annoying to the fans and teams to have a different set of rules each year specifically when it comes to the cars. He would loosen the regulations in hopes of creating more passing on the track, which is something everyone can get behind.

Overall, it is a relatively simple plan that could make a huge difference. However, if you aren’t a fan of the new segment racing, you need to take it up with someone else, because, surprisingly, stages are the one thing DW doesn’t want to change.

Related: NASCAR’s latest trick to pull in more viewers is a bit crazy