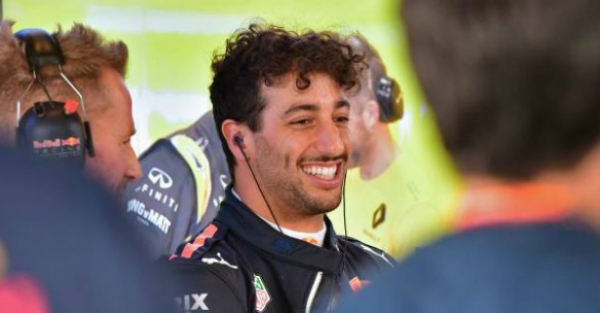 During practice for the Abu Dhabi Grand Prix, Daniel Ricciardo made an obscene hand gesture towards Romain Grosjean.

Ricciardo later downplayed the one-fingered salute, saying he was caught up in the “heat of the moment,”according to racer.com. Grosjean blocked the Red Bull Racing driver in the final sector during FP2, which prompted Ricciardo to give the middle finger to Grosjean as he crossed the finish line.

RELATED: F1 Driver Daniel Ricciardo Tours LA In Every Car He Can

He verbally used an expletive, which was caught on team radio after the fact, but Ricciardo says it’s water under the bridge.

“I had a bruised finger,” Ricciardo jokingly said in regards to gesture. “I had an oversteer, and I was just shaking it off.”

“He didn’t mean it. It is only practice, so I am not phased by it. Heat of the moment,” he said. “It was frustrating, I am on a heater and he is on an out lap. Was it good TV?”

In an effort to further plead his case and prove things were all good, he took to Twitter.

All jokes aside was a good day out here. Think we can find some more pace on the long runs but not far off. I do enjoy it under the lights. And for the record RG and me are sweet 😚

Ricciardo finished FP2 behind Lewis Hamilton and Sebastian Vettel. Hamilton feels optimistic about Red Bull’s potential, But Ricciardo feels the champ may be too far out of reach.

“Our short run pace looked pretty good,” said Ricciardo. “Still not on Lewis’ pace, but fairly there with Ferrari.”

We know we will need to find a couple more tenths tomorrow, the long run there is a little bit more to find,” he said. “A bit more work tonight, but generally not a bad day.”