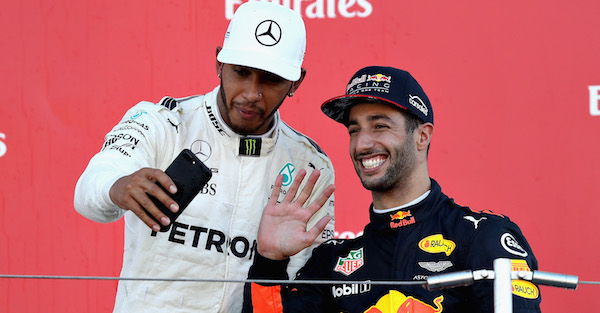 Mark Thompson/Getty Images
SUZUKA, JAPAN - OCTOBER 08: Third place finisher Daniel Ricciardo of Australia and Red Bull Racing and race winner Lewis Hamilton of Great Britain and Mercedes GP film a video on a phone on the podium during the Formula One Grand Prix of Japan at Suzuka Circuit on October 8, 2017 in Suzuka. (Photo by Mark Thompson/Getty Images)

Most Formula 1 fans would probably agree that Lewis Hamilton is the favorite to win the championship until there is a drastic drop off in his performance. He has four championships, and the 32-year-old has shown no signs of slowing down.

Don’t tell that to Daniel Ricciardo.

The Red Bull driver finished fifth in 2017, but he believes the improvements his team made towards the end of the year have put him in position to be the favorite next season.

Ricciardo told Motorsport that they had a rough start to the season last year, but he was encouraged by how his team finished the year.

“We just started off on the wrong foot,” Ricciardo said. “But the rate of development has been amazing, so I’m hoping if we can start on the right foot in 2018, you would argue we would be the favorites.”

Related: A driver bashes the last generation of race cars

“We started in the wrong direction and that spiraled for the first few races and then we brought it back,” Ricciardo said.

Ricciardo said he believes he would have challenged Hamilton for the title had they started off the season on a better note.

“We would be in the hunt,” he said. “We would have taken it to the end. At the start of the year, the chassis wasn’t where it needed to be. So it was both [chassis and engine].

“Now our chassis has improved a lot. It’s back to the scenario where it’s more engine than chassis at the moment.”

It’s a bold move for Ricciardo to say he should be the favorite next season, but he’ll need that kind of confidence if he wants to take down Hamilton.

Hamilton won nine races in 2017 en route to his fourth championship, while Ricciardo only won one. The 28-year-old only has five career F1 wins, so he’ll need to have the best year of his career if he wants to contend for the championship.