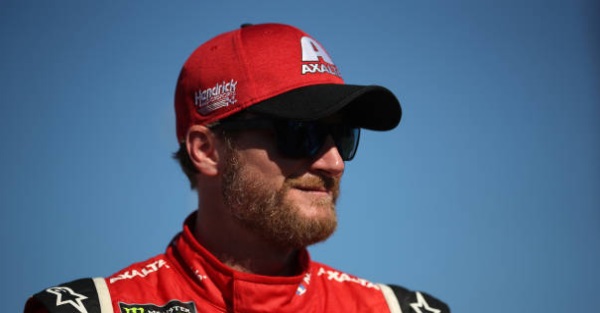 Now that Dale Earnhardt Jr. has entered into retirement, he’s got far more time on his hands.

This allows him to do everyday stuff like any normal man would do on a typical off day — wait outside of Best Buy until the store opens.

Earnhardt took to Twitter to share the chronicles of his full-time off-season as he awaited a Best Buy store to open so he could do a little shopping. But what really took the cake is he shared that he wasn’t alone in the parking lot.

It just goes to show you never know who you’ll run into when you’re posted up outside of a store waiting for it to open, and thoughts like that as well as many others ran through the heads of people leaving comments on Dale Jr.’s post.

One fan pointed out that the headbanging vaping metal-head had no clue he was parked next to NASCAR royalty.

And he has no idea he’s next to @DaleJr

JR Motorsports driver Tyler Reddick said the guy obviously wasn’t doing something right if Dale Jr. could still see him in the car.

If you could still see him, he wasn’t vaping hard enough, bro. 😂 pic.twitter.com/6TroaMsgfy

Many others chimed in with priceless responses at the expense of Stewart-Hass Racing driver Clint Bowyer, who was well represented in the spray painted Honda at Best Buy, so we thought we’d share a few of them with you.

Are you sure it’s not actually Clint?

I love that you added the Clint Boyer hat detail lmao

Then there were the fans just having a laugh that Dale Jr. was at Best Buy to begin with.

Going to get some CDs before they quit selling them?

Are you there for a SuperNES restock?

Regardless of what Earnhardt was there for it sure provided for some quality entertainment. Maybe he should make this a regular thing. Dale Jr. ‘s parking lot chronicles, with a different store each week.