Dale Jr. had 3 drivers battling for a championship, and it nearly killed him 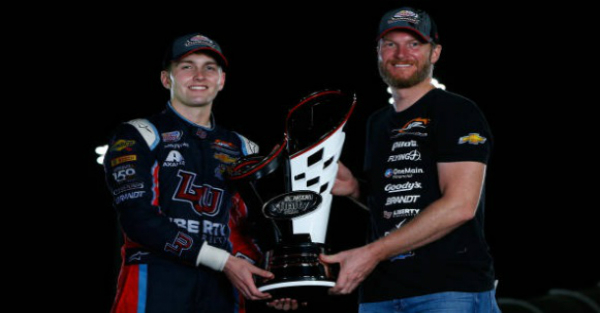 In a season that saw some incredible moments for Dale Earnhardt Jr., having three of his drivers competing to win a championship had to rank towards the top.

JR Motorsports had William Byron, Elliott Sadler, and Justin Allgaier all in contention to capture a title in the Xfinity Series at Homestead. Byron went on to win the championship, while Sadler finished second, and Allgaier finished third. Some teams are lucky to even have one car finish in the top-3 for the season, while proud team owner Dale Jr. had all three.

RELATED: William Bryon ends one career on top as he embarks on another

When asked how it felt to give three of his guys a shot at a title, with one of them coming out winning this thing, he said in the video above: “You know it takes a lot of people to get to this point, it takes so many important employees. A lot of them don’t travel.

“It’s an effort that affects a lot of people and we race on a budget and we have to make difficult decisions every year to stay there and this makes them a lot easier to make. When we’re having success like this — we put three drivers in the top-3 and a second owners championship — that affects our bottom dollar and allows us to make some less hard decisions. So, those are the things that I think about, I think about people’s livelihood and how much this puts us in a good position as a company.”

He went on to discuss how he felt while watching the Xfinity Series finale and how it felt to have two of his drivers battling it out for the win.

“So I’m excited for William. He’s got such a bright opportunity and future ahead of him,” Earnhardt said. “My heart breaks for Elliott because he ran his guts out all year.

“Those last 20 laps I felt like I was gonna throw up, you know kinda just getting ripped in two,” he said. “Watching one guy lose and one guy win.

Earnhardt was adamant about praising the crew behind the drivers and he made it clear throughout the interview.

“The list goes on and on before you ever get to me, as far as who’s responsible for this,” said Earnhardt.

It looks like all the hard work paid of for JR Motorsports. While Sadler came up just short of first place, and Allgaier finished third, as a team they took the top-3. No matter how you slice it, that’s pretty impressive.