Dale Earnhardt Jr. lost his cool during a confusing race at Kansas Speedway 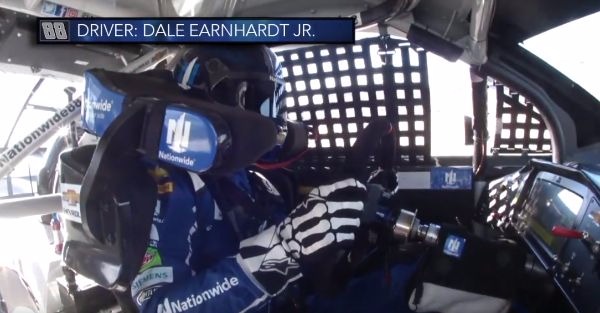 The elimination race at Kansas was characterized by confusion. Kyle Larson being knocked out in stage one due to a blown engine kicked it all off and a big wreck near the end had the whole field doing complicated arithmetic to see what their drivers needed to do to stay alive in the playoffs.

Larson knew exactly how long his odds were once his engine blew, saying: “Well, cross your (blank) fingers.”

Even non playoff drivers were feeling some pressure throughout the race as shown by Dale Earnhardt Jr. losing his temper at his spotter over some radio issues and miscommunication. Asking if he could be heard by his driver, Junior’s spotter got a frustrated, “Leave me the (blank) alone will ya?” in response.

As for the playoff drivers, every on track incident threw their postseason fate into doubt. He ended up advancing to the next round, but early in the final stage at Kansas, Jimmie Johnson’s chances luck looked to be running out. Johnson?s 48 car spun out and slid through the grass, picking up some damage. Johnson had no other explanation other than that the car just got loose. His crew went to work in an effort to get him back on the track as soon as possible and he went out and spun again. Johnson said he was still working with an overly tail-happy car but his crew chief, Chad Knaus disagreed.

Related: Former champion struggling to hold it together in the final stage at Kansas

“The car’s fine Jimmy, there’s absolutely nothing wrong with the race car. Nothing.” Knaus said to Johnson after the second straight spin. If the day had ended without the team staying alive to push for a championship, this tense moment could have been a much bigger sticking point between a driver and his crew.

Of course, Matt Kenseth missing out on the playoffs over a red flag penalty was the story of the race. And the scanner gives insight into one of the most confusing exchanges of the race.

“Seven guys only. Seven guys only, get tires on it. Six. Six guys,” Crew Chief Jason Ratcliff called just before seven men crossed the wall leading to Kenseth being disqualified. A slip of the tongue ended his season. Just like that.