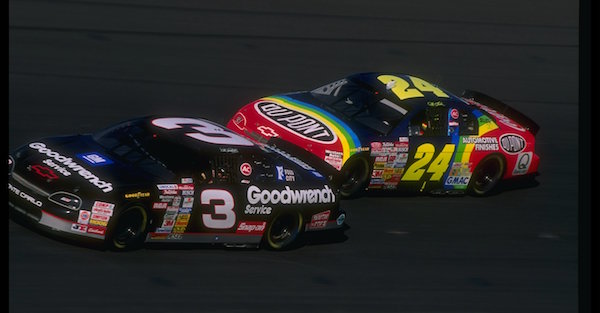 NASCAR fans have spoken, and they have officially crowned the GOAT.

NASCAR on FOX has conducted a bracket to determine the best driver in history, and it included 10 drivers. No. 3 seed Dale Earnhardt defeated No. 5 Jeff Gordon in the championship, and NASCAR fans believe The Intimidator is the best driver of all time.

DALE EARNHARDT IS THE #NASCARGOAT!

Fans have voted "The Intimidator" as the greatest driver in NASCAR history. pic.twitter.com/b7BUHhCWLw

Richard Petty was the top overall seed in the bracket, followed by Jimmie Johnson. Earnhardt was the No. 3 seed, and David Pearson was No. 4. After Gordon was Cale Yarborough, Darrell Waltrip, Bobby Allison, Tony Stewart and Kyle Busch.

Waltrip beat Busch in the first round, and Stewart beat Allison. Johnson knocked off Waltrip in Round 2, and Petty edged out Stewart.

Despite having three fewer championships, Gordon defeated Richard Petty in the semifinals. And on the other side, Earnhardt beat Jimmie Johnson in a battle of the two seven-time champions.

It’s no surprise that Dale Earnhardt won the whole bracket, and it’s hard to argue with the results. His seven championships are tied for most all-time with Johnson and Petty. If Johnson wins an eighth title, perhaps NASCAR fans would give him the nod. But it might be nearly impossible for anyone to pass Earnhardt in the minds of diehard NASCAR fans.