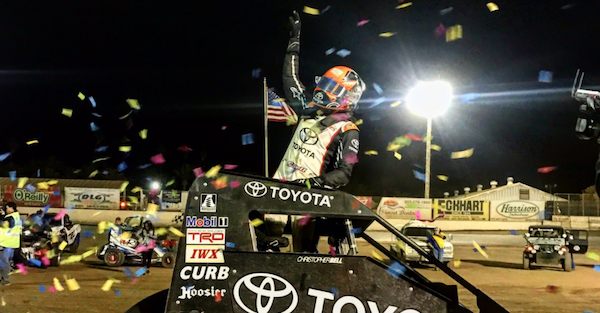 It’s been a great week for Christopher Bell.

The 22-year-old won his first Truck Series championship last weekend at Homestead, and he followed that up by edging out Kyle Larson for a win at the Turkey Night Grand Prix in at Ventura Raceway.

Bell, Larson and Chase Briscoe were the three NASCAR drivers involved in the race, and there was a battle between Bell and Larson throughout the night. Larson, who entered the race as the defending champion, couldn’t get past Bell late in the race on the final lap.

“Oh my god, it’s so much fun,” Bell said via USACracing.com. “I just told Kyle that if he would’ve beat me, I would’ve been, maybe not just as happy, but still happy because it was just that much fun. That race was one of the most fun races I’ve run in a long time.”

Related: The season isn’t over for these three NASCAR racers, who will drive in a race tonight

Bell said Larson made him work hard for the win, which made it even more special to him.

Anytime you can go wheel to wheel with @KyleLarsonRacin it’s gonna b a fun one! Hope everyone who got to watch enjoyed it! 🏁 https://t.co/zGhNafvVUU

“I definitely had to work harder for this one,” Bell said. “This one was even more fun and more special.”

Bell won five races in the Truck Series this year en route to his first championship. He’ll look to add another title to his resume next season.