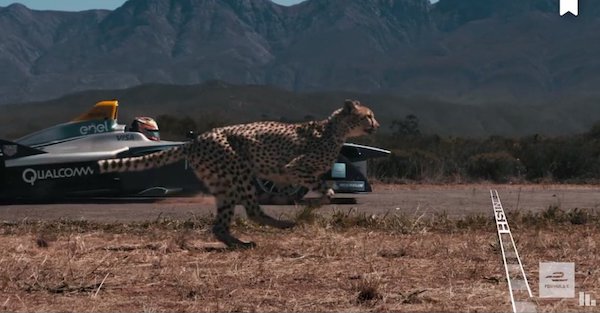 Jean-Eric Vergne, Techeetah driver, has released a clip showing a tight drag race between a cheetah and a Formula E electric race car. The race wasn’t just for publicity though. Vergne and his crew partnered with Cheetah Outreach, Animal Issues Matter, and the Endangered Wildlife Trust to raise awareness about climate change and the danger it poses to beautiful animals like the cheetah.

The race was close, with both animal and machine capable of going 0-60 in just three seconds, but the car ended up winning in the end. Barely. The results show that despite mankind’s progress in technology, nature still has some tricks up her sleeve when it comes to speed. Formula E founder Alejandro Agag said,

“We knew the similarities in performance between the Formula E car and a cheetah, so we were curious to see the outcome. But, what?s even more important is to determine the outcome for the future of not only us, but the cheetah and other animals we share our planet with.”

The timing of the race is auspicious, with the UN Environment Assembly scheduled to meet soon.

The Formula E season will begin this weekend in Hong Kong.