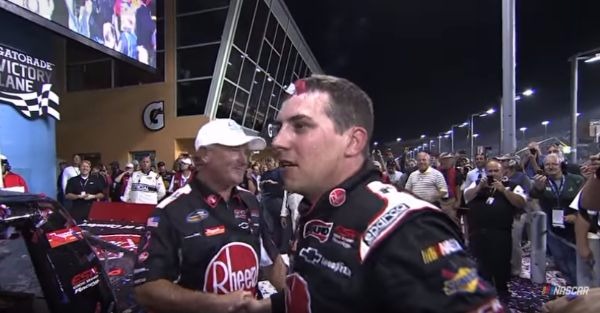 Cale Gale only had one full time season in NASCAR in 2012, but he made enough noise in that one year to be remembered. His most memorable moment, for better or for worse was his finish at the Ford EcoBoost 200 NASCAR Camping World Truck Series finale at Homestead Miami Speedway.

It was the last race of the season and Gale and Kyle Busch were neck in neck rounding the final corner heading towards the finish.

The intense finish where Gale was barely able to hold off Busch by pushing him up towards the wall became a defining moment in Gale’s career.

?It was a situation for me where I?d never had a chance to capitalize on a victory like that,” Gale said via NASCAR.com.“I didn?t know what my career would be like after that ? I didn?t have a ride in store for the next year. It could have been my last opportunity ever. So I did what any racer would do. It came down to the last lap of the last race of the season and I took advantage of that.?

After beating one of the biggest names in the sport, Gale was thought to have a long future in the sport. He has been able to stay in the sport, but not the way he may have thought.

Without a ride, Gale transitioned into the garage, first working for Darell Wallace Jr. as a shock specialist and eventually working in the Engineering department for Roush Fenway Racing.

He does still want to race, however, and he will get that opportunity at Martinsville in the truck series, four years after his last race.

Related: Bubba Wallace Jr. starred in an emotional behind the scenes video before his first Cup Series race