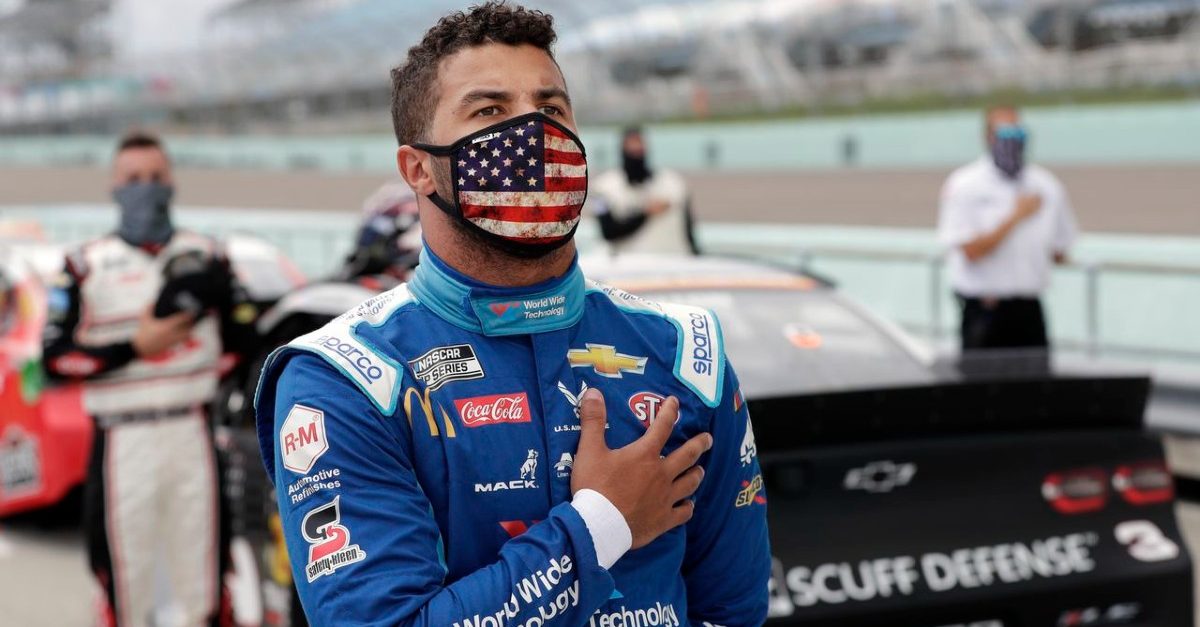 Editors Note: This article was originally published on June 21, 2020. It was updated on June 26, 2020, after NASCAR released an image of the noose found in Bubba Wallace’s garage.

NASCAR has released an image of the garage door pull-rope fashioned into a noose-style knot that was found in Bubba Wallace’s garage at Talladega Superspeedway, saying that an internal investigation determined it was the only one present at any of the 29 tracks it visits. The discovery of the noose led to an FBI hate crime probe that determined it had been there “since at least last October” and was not directed at Wallace.

The Richard Petty Motorsport driver has been a heavy supporter of the Black Lives Matter movement and agreed with NASCAR’s decision to ban the Confederate flag at its events. Steve Phelps, NASCAR President, stated he should have used the word “alleged” and taking emotion out of the initial announcement of his discovery on Monday, as he referred it to a “heinous act.”

NASCAR released a photo of the noose that was found last weekend in the garage assigned to Bubba Wallace, the premier series's only black driver.

“As you can see from the photo, the noose was real, as was our concern for Bubba,” NASCAR's president said. https://t.co/6H73g6klOV

The announcement later was followed by outpouring support for Wallace from the NASCAR field, ahead of the start of the Geico 500. Phelps stated the internal probe learned that the noose was indeed not present at the beginning of the October Cup Series weekend at Talladega, but was there at the end. He did note there isn’t enough evidence to determine who created the noose for why. NASCAR investigators also looked at 1,684 garage stalls at tracks across the country and found 11 with pull-ropes that had knots tied at the end, but the one in Wallace’s garage was the only one that looked like a noose.

Wallace stated he was “embarrassed” by the whole incident, but was relieved to know it wasn’t targeted at him. He spoke to ESPN stating he never saw the noose in person, and it was actually discovered by an African-American member of his team who reported it to NASCAR. Phelps stated he is bothered that it wasn’t registered with anyone sooner, reconfirming that Wallace’s team had nothing to do with the incident, which has been alleged by social media users.

Federal authorities said that no federal crime was committed regarding the noose.​ https://t.co/Zpl7T5Q3dC

On Tuesday, the FBI concluded that NASCAR driver Bubba Wallace was not the victim of a hate crime, as the alleged noose found in his garage stall had been there since October 14, 2019.

An official FBI official statement said that nobody outside of NASCAR officials could have known Wallace would have been assigned that garage until a few days before the Cup Series race at Talladega. In a separate statement, NASCAR added that the noose was actually a garage door pull rope that was fashioned in a loop.

“The FBI report concludes, and photographic evidence confirms, that the garage door pull rope fashioned like a noose had been positioned there since as early as last fall,” NASCAR said in its statement. “This was obviously well before the 43 team’s arrival and garage assignment.

“We appreciate the FBI’s quick and thorough investigation and are thankful to learn that this was not an intentional, racist act against Bubba. We remain steadfast in our commitment to providing a welcoming and inclusive environment for all who love racing.”

NEWS: The FBI has just released a statement about the NASCAR noose incident at Talladega, indicating it was a misunderstanding. No crime was committed. The noose was already there as early as last year. pic.twitter.com/j2MGrOvUN3

Wood Brothers Racing, the team that had Wallace’s garage during the Talladega race in October 2019, also released a statement. In it, they said that, on Monday, an employee had recalled “seeing a tied handle in the garage pull-down rope from last fall.”

“Just like the rest of the NASCAR garage, we were shocked and appalled to learn of the existence of the rope fashioned like a noose,” the Wood Brothers Racing statement read. “We immediately alerted NASCAR and have assisted in the investigation in every way possible.”

STATEMENT ON THE COINCIDENCE OF OUR STALL FROM 2019 AND THE INVESTIGATION pic.twitter.com/SJgKus8o8T

This post was updated on June 23, 2020. Below is information that was published before the updated information was included.

Nearly two weeks after NASCAR banned the Confederate flag from all events and properties, an alleged noose was found in Bubba Wallace’s garage stall Sunday at Talladega Superspeedway in Lincoln, Alabama, according to a statement from the auto sanctioning body.

Wallace, a 26-year-old native from Mobile, Alabama, never saw the noose, though it was first seen by a member of his team, who then brought it to NASCAR’s attention.

Some horrible, upsetting news to pass along: NASCAR says a noose was found in Bubba Wallace’s garage stall today at Talladega. pic.twitter.com/uPyqCYsogo

“Late this afternoon, NASCAR was made aware that a noose was found in the garage stall of the 43 team,” NASCAR said in an official statement. “We are angry and outraged, and cannot state strongly enough how seriously we take this heinous act,” NASCAR said in a statement. “We have launched an immediate investigation, and will do everything we can to identify the person(s) responsible and eliminate them from the sport.”

Wallace, who drives the No. 43 car for Richard Petty Motorsports, was a driving force behind NASCAR’s decision to ban the Confederate flag, even appearing on CNN to address the issue. Wallace is currently the only Black driver in the elite NASCAR Cup Series. He’s also racked up such accolades as the highest-finishing African-American in the Daytona 500 (2nd, 2018) and the highest-finishing African-American in the Brickyard 400 (3rd, 2019).

“Today’s despicable act of racism and hatred leaves me incredibly saddened and serves as a painful reminder of how much further we have to go as a society and how persistent we must be in the fight against racism,” Wallace wrote, in a message shared to Twitter and Instagram.

“Over the last several weeks, I have been overwhelmed by the support from people across the NASCAR industry including other drivers and team members in the garage. Together, our sport has made a commitment to driving real change and championing a community that is accepting and welcoming of everyone. Nothing is more important and we will not be deterred by the reprehensible actions of those who seek to spread hate.”

“As my mother told me today, ‘they are just trying to scare you.’ This will not break me, I will not give in nor will I back down. I will continue to proudly stand for what I believe in.”

Following the incident, a number of current and former athletes showed support for Wallace via Twitter, including Dale Earnhardt Jr. and LeBron James.

Richard Petty also said that he would attend Monday’s Talladega race, his first since the coronavirus pandemic halt, to stand in solidarity with Wallace. The 82-year-old NASCAR Hall of Famer told ESPN’s Marty Smith, ?The most important thing for me right now is hugging my driver.?

Sickening! @BubbaWallace my brother! Know you don’t stand alone! I’m right here with you as well as every other athlete. I just want to continue to say how proud I am of you for continuing to take a stand for change here in America and sports! @NASCAR I salute you as well! 🙏🏾✊🏾👑 https://t.co/1TwkjVHai5

I can’t begin to fathom the pain this action has caused. I stand with you @BubbaWallace. https://t.co/lV8v46ktWN

I don’t worry about our sport. I have confidence NASCAR’s leadership will find who did this and continue pushing us in the right direction. I do worry about Bubba. I hope Bubba is feeling loved and supported. Keep sending him that love and support. He needs it now more than ever.

I STAND WITH @BubbaWallace ✊🏿✊🏿❤️ https://t.co/5qDnHrQHKi

I stand with you champ https://t.co/GGRXWwy2FM

Alabama Governor Kay Ivey also decried the placement of the noose in Wallace’s garage as a “vile act” in an official statement.

?I am shocked and appalled to hear of yesterday?s vile act against Bubba Wallace in Talladega — there is no place for this disgusting display of hatred in our state,? Ivey said. ?Racism and threats of this nature will not be condoned nor tolerated, and I commit to assisting in any way possible to ensure that the person responsible for this is caught and punished. While the important conversation of racial reconciliation is ongoing all over our country, it is clear there is much work to do.

?Bubba Wallace is one of us; he is a native of Mobile and on behalf of all Alabamians, I apologize to Bubba Wallace as well as to his family and friends for the hurt this has caused and regret the mark this leaves on our state. I ask the NASCAR family to rally around Bubba and his team as they compete today, and I know that there are more people who are wishing him well today than ever before.?