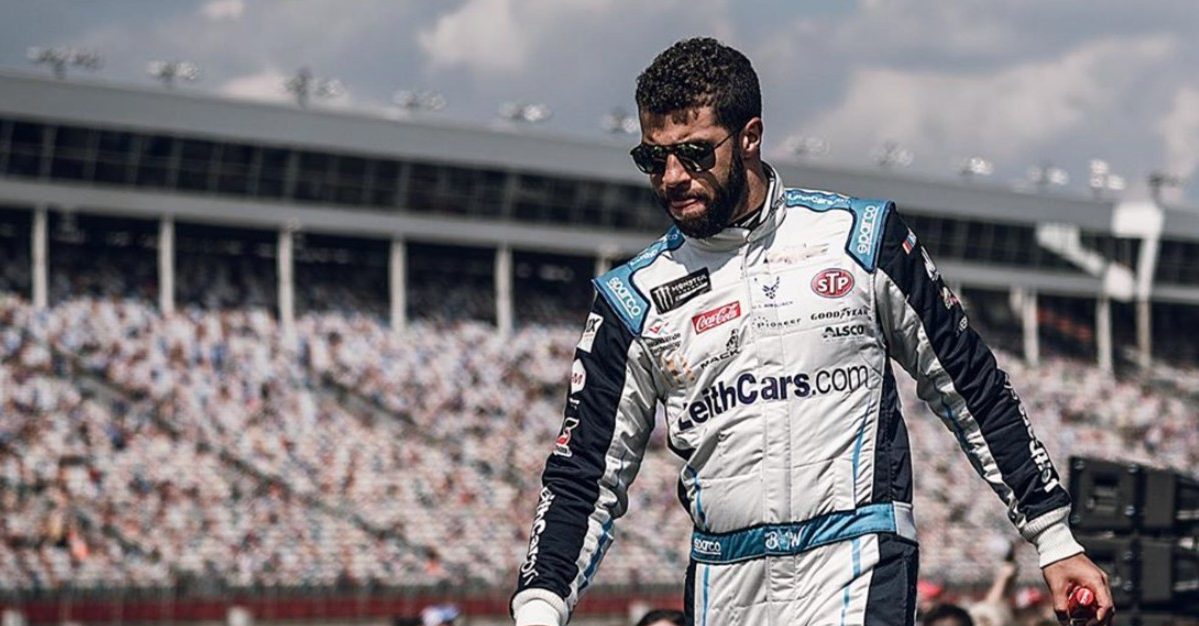 In May 2019, NASCAR driver Bubba Wallace admitted that he had been struggling with depression “for many years,” after an emotional breakdown during a frustrating weekend at Kansas Speedway. Since then, Wallace’s honesty and openness has endeared him to a host of NASCAR fans, and even though he’s had some slip-ups along the way (namely his incident with Alex Bowman after the Charlotte playoff race), the driver of the No. 43 Chevrolet for Richard Petty Motorsports driver still has plenty of folks who are rooting for him.

To offer more insight into his fight with depression, Wallace joined Dale Earnhardt Jr. on the Dale Jr. Download podcast and got real about his rough moments with the former NASCAR star.

“I guess I’ve never looked at it as a sign of weakness or coming out and talking about any issue that I have,” Wallace said. “If you ask me, I’m going to tell you. I don’t know if it’s the bigger picture or light at the end of tunnel, but I was definitely in rough times there at Kansas. They were like, ‘What’s going on, you seem different?’ And I said, ‘I’m depressed, it’s as simple as that.'”

“For weeks and weeks (since then), I’m still getting thanked for talking about depression, that it’s helped so many people. I’m like, ‘Oh, I didn’t know it was such a big deal.’ I was just asked what was going on, and I told them because I’m an open book. What you see is what you get. But it’s such a bigger deal than ‘I’m just depressed.’ Hey, I’m going through this, days are dark and long and I’m quiet and lonely and I’ve never been able to come out and talk about that. It’s signs of weakness and whatnot.”

Wallace also admitted that while he has gone to therapy for his illness, he hasn’t been in nearly four months, though he says that he has tried working out his problems on his own.

“I tried,” the Mobile, Alabama native said. “I went to counseling and people say there’s nothing wrong with counseling. I went and did that twice with a psychiatrist and psychologist and it was very weird, sitting there talking like this is what I’m feeling. ‘Well, why are you feeling this way?’ I don’t know, I just am. They said you’ve got to give it time, it’s not going to go anywhere in two weeks and I stopped going. I can’t do it.”

About being an emotional person on and off the track, Wallace said, “That’s how it’s always been, really.”

“I think I’m guilty of doing before I think, especially on the negative side. It’s like, uhhh, probably shouldn’t have done that.”

No Ragrets.. appreciate you @DaleJr https://t.co/knNarGIEq3

Wallace further opened up about his parents’ divorce in 2016 and how that seriously impacted him, even leading to a physical confrontation between himself and his dad.

“The light switch went off, I got in my truck and went over and fought my dad, like swinging fists, just did before I thought. A physical altercation,” Wallace said. “For 15 years of racing it was me and him. And then that day, that was it.”

Though their relationship isn’t close to being the same, Wallace says that has tried patching things up with his father.

“This year, finally my dad and I are making some progress,” Wallace said. “My dad is super hard-headed to talk to and just to make him understand things. I still love him to death, no matter what, right, wrong or indifferent, he’s still my dad.

“This is a big chunk of the depression I’ve had, losing your best friend.”

With 92 career NASCAR Cup Series starts, Darrell “Bubba” Wallace Jr. has raced for four years at NASCAR’s top level. He also has 35 top-10 finishes in the Xfinity Series and became the first African-American driver to win in the NASCAR Gander Outdoors Truck Series. Other career highlights include a third-place finish in the 2019 Brickyard 400 and a second-place finish in the 2018 Daytona 500, both marking the best finishes in those races for an African-American driver.

Over a year after his interview with Dale Jr., Wallace has also dealt with plenty of fallout over NASCAR’s decision to ban the Confederate flag, which culminated in the infamous noose incident in Wallace’s garage at Talladega Superspeedway.

More NASCAR accolades are surely coming Bubba Wallace’s way, but perhaps no one knows better than him that, without good mental health, all those accomplishments on the track mean nothing.