After being wrecked out of the race, a driver has strong words for NASCAR 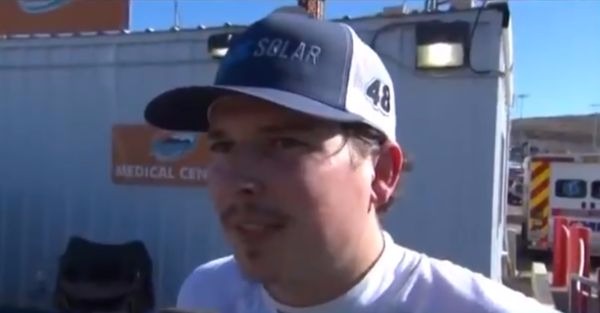 After being eliminated from the race, and most likely the playoffs, Brennan Poole brought up something that will have many drivers and fans nodding in agreement.

.@BrennanPoole is moving on to @HomesteadMiami after an early crash likely eliminates him from the title hunt at @PhoenixRaceway. #XfinityPlayoffs

Poole wrecked into Daniel Hemric as both were trying to navigate lapped traffic.

Related: Contender may have to say goodbye to his championship hopes after this crash

“We gotta reevaluate some of these lapped cars and who is out there and who is not out there,” Poole said.

He is not the first person to suggest that NASCAR needs to do something about cars that might not belong out on the track. Analyst Steve Letarte has said that he wants cars that can’t stay within a set number of laps as the leaders should be black flagged. Driver Regan Smith presented the same solution. He said once a driver is down five laps, they should be forced to call it a day and head to the garage early.

Lots of comments about backmarker cars crashing on here, perhaps it’s time for a -5 laps rule? Once your 5 down go ahead and park it.

I believe this should be a conversation in #Nascar. It would put a lot of people out of their misery. https://t.co/Ghfxx52pI7

Martin Truex Jr. has also said something needs to be done about cars lagging off the pace.

“We need to up minimum speed for cars that were not in an accident, that didn’t get on the five-minute clock for crash damage, for that very reason,” Truex said via NBCSports. “We don’t want to go to Homestead and have a car that’s 25 laps down scrape the wall or blow a tire and change the outcome of possibly a championship or who the champion is. I think it’s something they’re definitely willing to look into. I think it makes sense.”

“I would say that minimum speed right now probably is too far off from where we run,” Truex said. “You have to be way, way off the pace to go 16 or 20 laps down under green at a short track, for a 400-lap race. Losing a couple of laps is one thing. But 15-plus, you probably don’t need to be out there.”

With seemingly everyone agreeing that backmarker cars are causing issues (other than the those teams themselves), it will be interesting if NASCAR does something about it. They have already shown they are willing to tweak rules on the fly before.