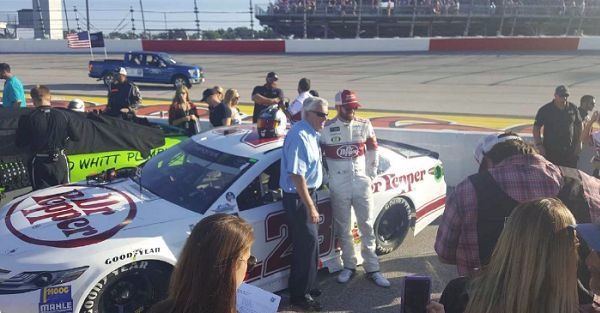 If you’re a casual NASCAR fan, then you probably never heard of BK Racing and for good reason.

Since the team was founded in 2012, its only earned three top-10 finishes in six seasons. In 2017, it fielded the No. 23 and No. 83 Toyota Camrys, which were piloted by an assortment of drivers, including Corey LaJoie, Joey Gase, Ryan Sieg, Brett Moffitt, and Stephen Leicht.

Due to their lack of success on the race track and with team owner– Ron Devine–facing lawsuits away from the track, there was uncertainty as to whether BK Racing would even compete in the Cup Series next year. However, all that speculation was put to rest thanks to a recent announcement the Lynch Racing Co. has purchased a minority ownership share of the team.

RELATED: A lawsuit over a charter could have a direct impact on the Daytona 500 linuep

The Lynch Racing Co. and Devine have yet to iron out details on how involved the company will be in the team’s day-to-day operations, but Devine still sounds pleased with the new partnership.

?We?re constantly trying to improve and I think this is a step in the right direction to do that,? Devine said, according to NBC Sports. ?I think it?s a welcoming transaction for us and I?m excited about it. There?s a lot of work to do between now and that green flag at Daytona, but we?re on it.?

Now that BK racing knows it will be racing in 2018, it just has to name its driver(s), find sponsorship, and decide whether it will field one or two race cars at Daytona.

That does sound like too tall of an order, does it?