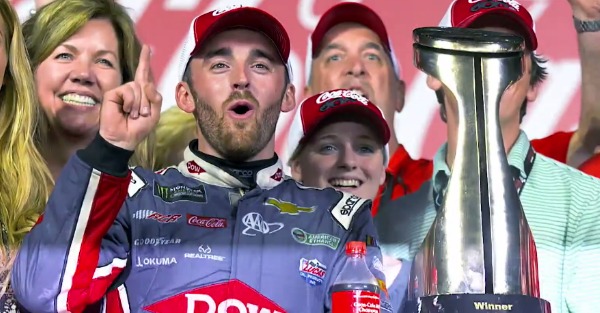 Austin Dillon knew exactly what the number three meant. He asked for it knowing the pressure associated with it, but wanted to give the fans what they want: The number three car running at the front of the pack. The 27 year old Dillon finally got his first win at the Coca-Cola 600 in Charlotte and there is no question that he absolutely deserved the win after the hard work and hard hits accrued throughout his blossoming career.

With a perfect fuel strategy and a little luck, Dillon got the number three got back to victory lane for the first time in 17 years. Seeing the excitement on the entire crew’s faces when Jimmie Johnson begins to slow after running out of fuel, it is clear what that first win means to a team that voluntarily took on the pressure of one of the most revered numbers in the sport. With a huge monkey off of his back, Dillon could be taking that three car to the front more often.

And, for his part, Dale Earnhardt Jr. is happy to see the car back on top.

Related: The closest view of Austin Dillon’s insane wreck will blow you away