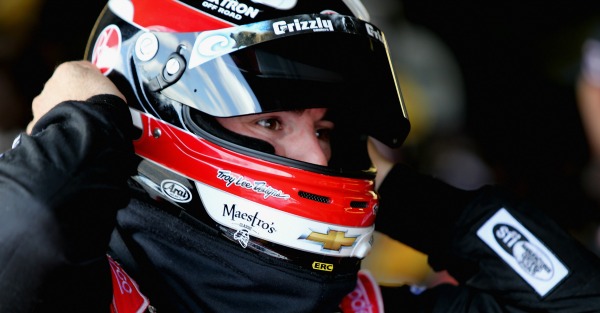 Austin Dillon was too amped after his impressive fourth place finish at the Southern 500 to sleep. So, instead of just staying in bed, he decided to go for a walk. On NBSSports’ NASCAR America, Dillon recounted the story of a night that could have ended tragically.

At four in the morning, Dillon and a few of his friends were still up after the race and went looking for something to do.

?We had a solid run so I just hung out outside my motor home a little bit, had a couple nice drinks and still had my driver?s suit on,? Dillon said. ?We decided to check out the track, so a couple of us rode my golf cart around the track a couple times, and that was cool.?

But, like anyone up at four am will tell you, it’s easy to get bored pretty quickly. After goofing off with his friends for a bit, Dillon went to see what the common folk were up to at this hour.

?Heck, I wanted to go see what the fans were up to, so we rolled into the infield and I walked into a couple motor homes,? Dillon said. ?It was 4 in the morning at this point. They had gone night-night. People were starting to leave, it was pretty funny. I was waving to them, signing autographs. This lady had an Austin Dillon shirt on, leaving with her husband, taking their motor home out at 4:30 a.m.?

Sounds like a fun time, until it almost went too far. Dillon ended up finding someone who was not as eager to party as he was. Dillon explains:

?We walked in a motor home and one guy said, ?I?ve got a gun in my sleeping bag.’?

Oh! That’ll put a damper on the night! It’s all fun and games until someone pulls a gun! Dillon had the perfect response to a potentially terrifying encounter:

Related: Austin Dillon put in hard work and took some hard hits to get where he is now