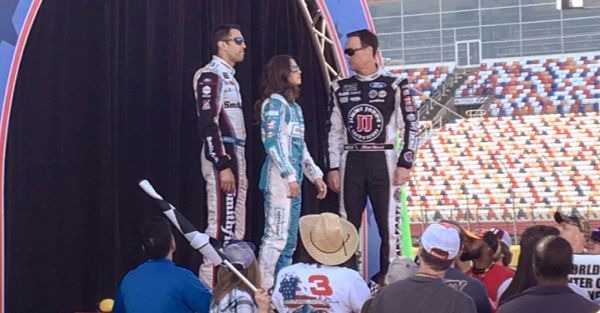 Drivers change rides every year in the Cup Series and 2017 certainly hasn’t been an exception.

After suffering a compression fracture to his T5 vertebra in a three-car wreck at Kansas back in May, veteran driver Aric Almirola took seven races off to heal. However, Almirola’s replacement in some of those races–Bubba Wallace–impressed team owner Richard Petty so much that he signed the 24-year-old to drive the No. 43 car full-time next year.

Don’t worry though if you’re an Almirola fan, as he recently signed with Stewart-Haas Racing to drive the No. 10 Ford Fusion in 2018. Signing with SHR means Almirola should have better equipment to drive, especially when you consider the team has combined to win multiple races this year and it’s top-driver, Kevin Harvick, has already secured a spot in the Championship 4 race at Homestead.

Despite signing with a more successful team, there’s one NASCAR analyst– Michael Massie of Frontstretch.com–who doesn’t think Almirola will fare any better driving the No. 10 and it’s because of what happened earlier this year at Kansas.

“Ever since his wreck at Kansas Speedway where he fractured his back, Almirola has appeared to be driving scared,” Massie wrote. “He finished fourth at Talladega Superspeedway and ninth in his return to Kansas, but both of those were a result of most of the field wrecking. Almirola got through those wrecks by being so far behind the lead pack that the wrecks were over by the time he got there.

“I could be wrong about Almirola being scared, and I honestly hope that I am, but it is just something to watch for. I know if I hurt myself while driving then I would certainly be terrified of it.”

Only time will tell if Massie is correct.

What we do know is Almirola was clearly excited when Tony Stewart officially announced he would be piloting the No. 10 Ford, which can be seen in the video above. If he’s anything like his boss, Almirola will use the criticism of his driving abilities as fuel to go out and win more races.