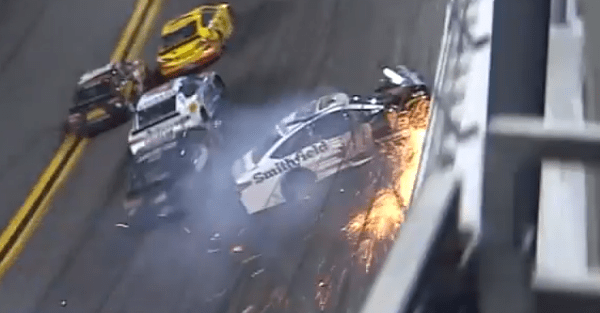 Nothing to see here.

That was the message Aric Almirola gave to reporters after the Daytona 500. Almirola was leading the pack with just over a lap to go when Austin Dillon bumped him in the rear. That tap caused Almirola to wreck, and just like that, victory turned to defeat. Almirola was credited with finishing in the 10 spot.

He noted, in an infield interview immediately after the race, that he was “heartbroken” by the turn of events. And while Fox Sports asked if the move was “clean or not,”  Almirola said he has no problem with Dillon’s move.

“Ha! He’s not driving too aggressively, he’s trying to win the Daytona 500 just like I was,” Almirola said to reporters after the race and reported  by Racer.com. “I saw him come with the momentum and I pulled up to block and did exactly what I needed to do to try to win the Daytona 500. I wasn’t going to just let him have it ? I wasn’t going to stay on the bottom and let him rail the outside.

“So I blocked and he got to my bumper and pushed and I thought I was still going to be OK…and somehow I got hooked. I haven’t even seen the replay, so I don’t know what happened. I’m just devastated. I really thought we were going to start this relationship off with Stewart-Haas Racing in victory lane, and get [sponsor] Smithfield and Ford and everybody to victory lane.”

It would have been easy for Almirola to scream that this was a dirty move, but he didn’t. He took the high road. But he may have also sent a more subtle message … that kind of move, then, is fair game for me.