70-Year-Old Drag Racer John Force: “When I Get in My Race Car, It Doesn’t Know How Old I Am” 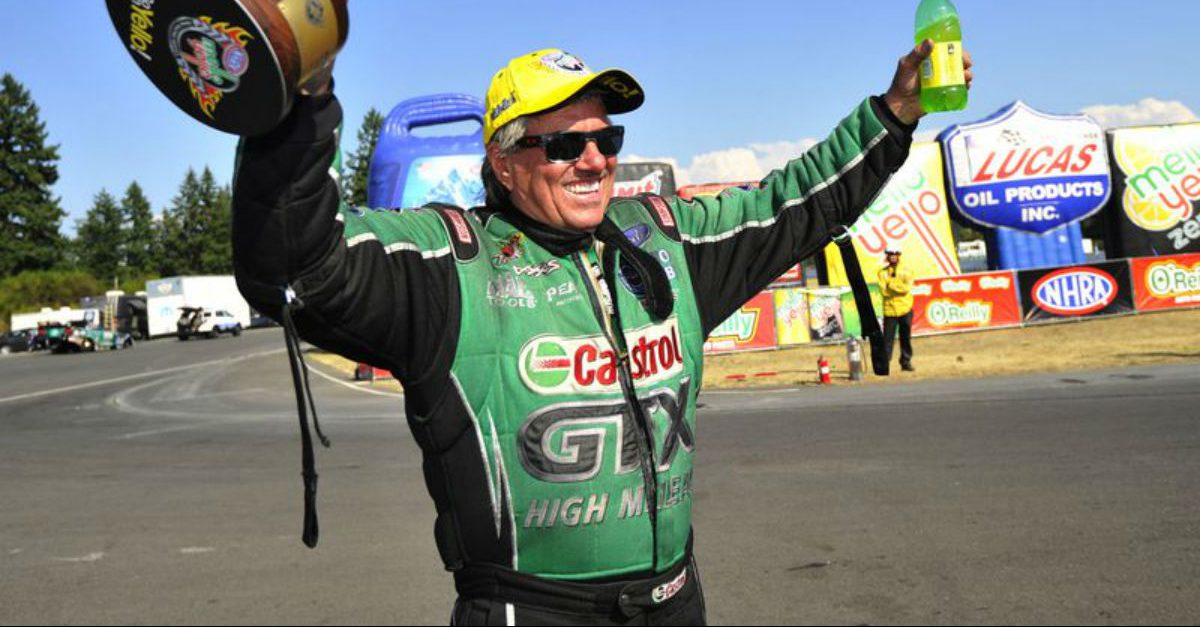 Proof that John Force isn?t slowing down in his old age came in September when he rocketed down a drag strip at 324 mph to win the Funny Car division at the U.S. Nationals in Indianapolis.

At an age where a lot of people are looking backward, Force is still going, well, full force forward. More than a half century after he began piloting dragsters, the 70-year-old will be in his Funny Car this weekend as the NHRA kicks off its 2020 schedule at Auto Club Raceway in Pomona, California.

The 16-time NHRA champion and the patriarch of a family of racers returns for yet another season behind the wheel of his dragster in his 44th NHRA season. He?ll do it after being inducted into the National Motorsports Press Association Hall of Fame, where he was introduced by longtime friend Rusty Wallace.

Really have to thank @NMPA, what an honor, truly humbled. Also need to thank my buddy @RustyWallace for introducing me! We go way back don't we, Rusty? Wish I could have been there but the 2020 @NHRA season is here and we had to go testing. Congratulations to the other inductees! https://t.co/GIC0PmFPlE

The winningest driver in NHRA history said he is as excited to be racing again as he was when he began in the 1960s.

“We love it, it?s what we do,?? Force said. “If I wasn?t doing this and quit racing I?d get me an 18-wheeler, load the grandkids up and go racing somewhere else. I?ve gotta be at a racetrack, that?s my real home.??

Force win last fall in Indianapolis broke a 17-year drought in the U.S. Nationals, drag racing?s biggest event, and gave him career win No. 151. Thirteen years after an accident left him so injured doctors said he might not walk again he is still strapping himself in to go full throttle down the track.

He?s spawned a family of drag racers, including his three daughters. Brittany Force is the only one of the siblings still racing. Last year, she became the first woman to be the No. 1 qualifier at the U.S. Nationals and holds the Top Fuel record of 338.17 mph.

There are grandchildren and in-laws too, in the first family of drag racing.

“We just keep chasing the dream,?? Force said. “I won Indy, the biggest race last year, walked away and started crying. I love it so much I?ve got to fight and stay in this game.??

The game is changing some as old school racers fade away and it?s harder to find new stars to take their place. Drag racing has always been a cultural kind of thing, and a younger generation growing up driving Toyotas instead of hot rods is making it a tougher sell.

And with the prohibitive costs of running dragsters, Force has to sell himself at every turn, even with his impeccable credentials.

“The sponsors aren?t standing on street corners like they used to be,?? he said. “I know I?m overloaded with things to do, what I?m looking at is building my own marketing to have a team that wakes up every day and all they do is chase money.??

Force said fans are still turning out to watch the noisy spectacle that is drag racing. There are television packages, too, that help fund the series and promote it to new fans.

But with 24 races this year, not everyone will run every week because of the high costs. Still, the season begins in Pomona, and Force talks as fast as he races when looking forward to the schedule.

“It?s stupid the way I talk about it but I really love it,?? he said. “Even on days I?m down I find the energy from fans, my team and my grandkids. I mean it?s Pomona, my 6-year-old grandson told me the other day, ?Grandpa we?re going racing.’ How can a 6-year-old even know that???