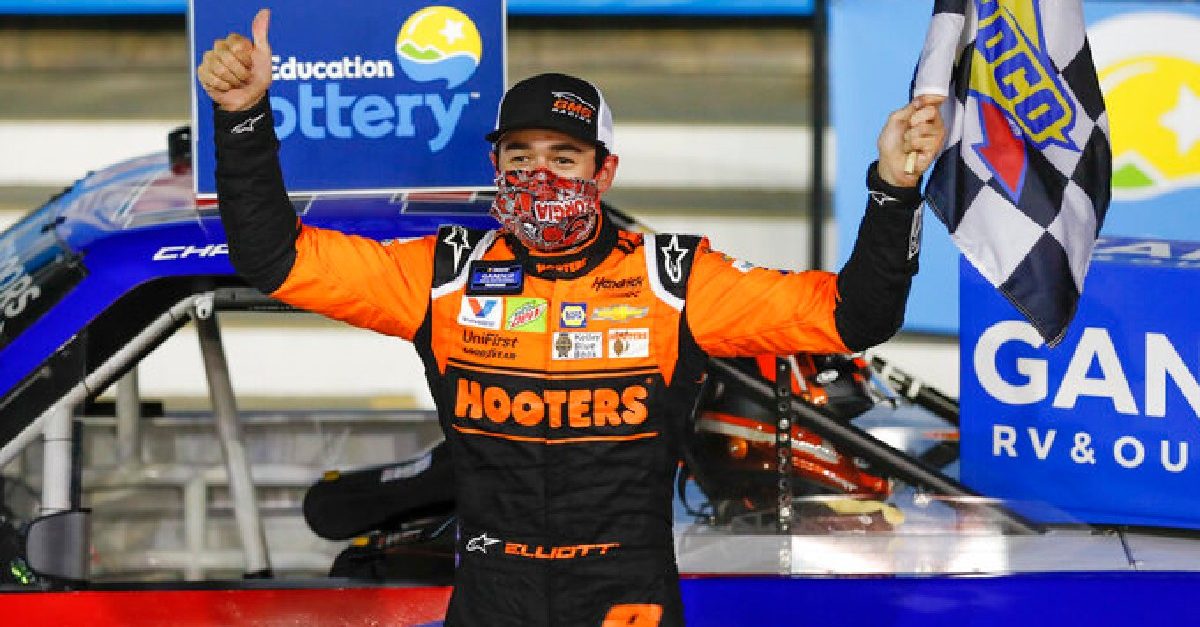 CONCORD, N.C. (AP) ? Chase Elliott gained a measure of revenge against Kyle Busch on Tuesday night ? and then let him know about it.

Elliott snapped Busch?s seven-race Truck Series winning streak and collected a $100,000 bounty at Charlotte Motor Speedway before imitating Busch’s victory celebration after the race by bowing to the camera.

?Hopefully nobody gets their feelings hurt over it,? Elliott chuckled.

Busch appeared noticeably upset after the race, but it had nothing to do with the bow.

He cursed in an interview with Fox after the race.

The interview wasn’t aired live, but Busch said “it sucks when you start the race with broken pieces after you’ve been sitting for six months. There’s going to be some (expletive) talking when I get home.?

Busch was upset over a splitter problem that caused problems for his No. 51 Toyota all night long.

Later, on a Zoom call, he was informed about Elliott’s bow.

"That's cute."- Kyle Busch reacts to hearing that Chase Elliott did one of Kyle's signature victory bows after the race. pic.twitter.com/NhZMncocKx

?Imitation is the strongest form of flattery or whatever it is. But, hmmm, that?s cute,” Busch said sarcastically.

?It was a spur of the moment thing,” Elliott said. “I thought we had so much fun with this with Kevin (Harvick) putting up the money and Kyle was a good sport. It?s not a dig at anybody. It?s just having fun. It was about beating him and we did and had some fun with it.?

Harvick pledged before the race to donate $50,000 to Covid-19 relief for any full-time Cup driver who finished ahead of Busch. Marcus Lemonis, the CEO of Gander RV & Outdoors, which sponsors the Truck Series, agreed to match Harvick?s pledge, bringing the total to $100,000 for pandemic relief. Elliott, John Hunter Nemechek and Brennan Poole were the three full-time Cup drivers eligible to collect the bounty.

The win comes six days after Busch wrecked Elliott in a Cup Series race at Darlington and two days after Elliott?s costly decision to pit late in the Coca-Cola 600, opened the door for Brad Keselowski to steal an almost certain win from him had the race stayed green.

?It doesn?t make up for Sunday but it was still a really good night,” Elliott said.

It was Elliott’s first Truck Series race since 2017 when he won at Martinsville.

He said he wanted to race at Charlotte just to beat Busch.

?It was about beating Kyle and we did that so I guess I can quit now,” Elliott said.

Zane Smith finished third and Brett Moffitt was fourth in the first truck race since Feb. 21.

Busch had won 57 Truck Series races entering the night, the most of any driver in history, and appeared to be the favorite. But he could never chase down Elliott on a long green flag stretch to close the race, getting no closer than 0.3 seconds of the leader.

Busch started 16th and quickly made a move to sixth place before splitter issues forced him to pit and dropped him back to 33rd place. But the winner of 210 races across NASCAR’s three top series quickly moved back into contention with a strong second stage and took the lead on lap 69.

But when Busch pitted with 34 laps to go it dropped him all the way back to 23rd and he could never regain the lead. Busch said the problem involved some front travel limiters that prevent the splitter from crashing to the ground.

?Threw it away,? Busch said. “Had six months to prepare and screwed it up.?

This was Busch?s third race in three nights. He followed up a fourth-place finish in the Coca-Cola 600 on Sunday by winning the Xfinity Series race on Monday in overtime after passing Austin Cindric on the final lap.

For Elliott, the win ended a string of bad luck and should help his confidence heading into the second Cup race in four days at Charlotte Motor Speedway on Wednesday night.

?It was certainly was rewarding,? Elliott said. “But it doesn?t fix the last two races on the Cup side. Those were really important for every day life and this doesn?t fix that.?